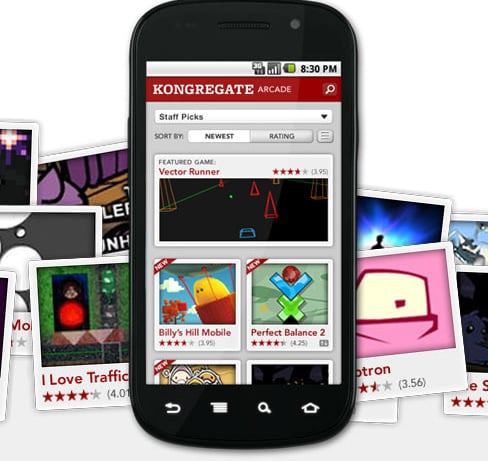 After a little bit of drama, the Kongregate Arcade app is now back on the Android Market, complete with access to the 300-odd achievement-laden Flash games. So what was all the fuss with being pulled by Google in the first place? Well, Google thought the Arcade was too much of a competing marketplace, which is understandable considering many of the games in the Arcade were also being sold on their own in the Android Market.

The video below, featuring Kongregate’s CEO, demos the changes they made to make Arcade less of an app portal. They’ve mainly made it more clear that it’s really just a shortcut to existing Flash games accessible through the Android 2.2 Froyo browser. To that end, they’ve eliminated SD card caching of games for offline play, and are instead relying on browser caching, plus they’re showing the browser’s address bar when loading one of the games.

It’s good that everything has been settled to everyone’s satisfaction, and just goes to illustrate how blurred the line between web app and native app can get. If you’re looking to access to a bunch of games, and have confidence in your phone’s Flash performance, you should be able to find Kongregate Arcade in the Android Market here.

We honestly didn't need to see the Galaxy S 4G to believe that it's essentially a T-Mobile Samsung Vibrant with...