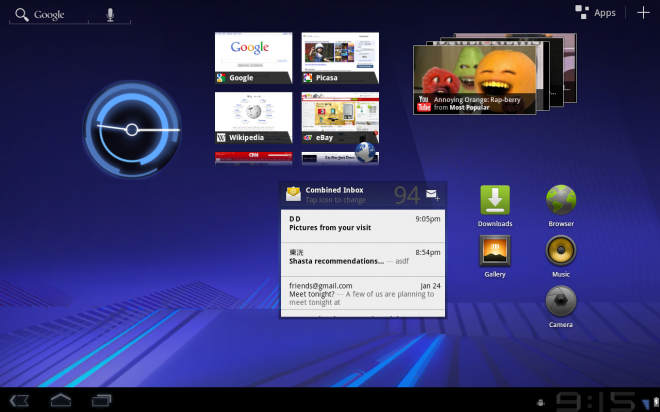 It may not have been officially released yet, but Google has just posted a preview of the upcoming tablet-optimized Android 3.0 Honeycomb SDK. The preview offers up some new APIs that developers can take advantage of, which should yield some new, sexy apps for the Android tablet end user.

From the Google Android Developer blog:

Here are some of the highlights:

Support for multicore processor architectures: Android 3.0 is optimized to run on either single- or dual-core processors, so that applications run with the best possible performance.

Those are just the new developer features, and we have yet to dig into the new user features, of which there are many. First off, even though we had it confirmed previously, Android 3.0 can be used on a single, or a multi-core processor, so there’s a good chance that even some of the cheapest Android tablets will be receiving the 3.0 update if the manufacturer of the said smartphones should choose to do so.

As far new user features go, there’s a lot of them. Major applications like the Browser, Email, Contacts, Camera, and Gallery have all received face-lifts to take advantage of the extra screen real estate afforded by the larger tablet form-factor. We’ve already seen what YouTube and Google Books will look like, and we expect to see more 3D-happy apps like this throughout 3.0.

Honeycomb also brings with it a redesigned keyboard that we’re hoping takes advantage of Google’s BlindType acquisition. The keyboard is optimized for larger screens, and now has some extra keys, such as “Tab,” to offer users more options. Honeycomb 3.0 also brings a better multitasking implementation, making the experience completely visual. This will allow you to not only see what applications are currently running, but what you were doing within the application when you left it.

There are many for features we can look forward to in the Honeycomb update, so until it’s released, be sure hit up the links below to get your fill!