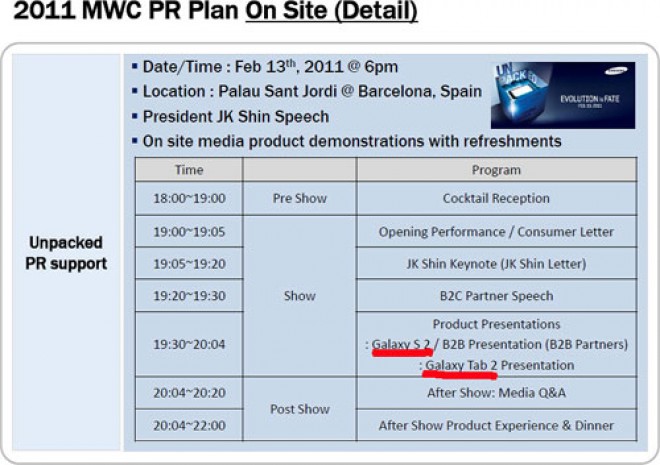 This shouldn’t come as a shock to many people who’ve been staying up with the news cycle, but Samsung will bet announcing the Galaxy S 2 and the Galaxy Tab 2 at Mobile World Congress next month. Apparently Samsung lost track of a copy of their schedule for the event, and it found itself in the right hands. Those right hands meaning Samsung Hub, who shared it with all.

This is about as solid a confirmation then you can get without an official announcement. The Galaxy S 2 is no stranger to us, even if half of the news surrounding the handset have been rumors, but we expect a nice step up in the hardware department. The previous rumored specs for the device included a 4.3-inch Super AMOLED 2 display, with a resolution of 1280×720 and 340 dpi. What was initially said to be a 2GHz CPU will likely be a dual-core processor clocked at 1 GHz per core. The HD video recording capabilities of the device were rumored to be in 720p, but more recent rumors hint that it could be bumped right up to 1080p. Round that out with 1GB of RAM, 8 megapixel camera with LED flash, and Android 2.3 Gingerbread and we may have found the Samsung device we’ve been looking for.

We’ve been expecting to see the Galaxy S 2 for sometime now, but we believe it’s a little soon for a Galaxy Tab 2. Not that we’re complaining. Said (and expected) to feature a dual core processor, possibly the NVIDIA Tegra 2 or the Orion, and hopefully some Android Honeycomb on board, the second-generation Galaxy Tab will likely get some good traction with Android fans. The current version of the Android tablet is a pretty cool device, but dual-core is where it’s at. We don’t know much more about the Tab 2, but we can expect it to retain its 7 inch display, and hopefully that display will be Super AMOLED. I’d like to see a bigger tablet coming from Samsung, but if the Tab 2 delivers where it should, and it looks like it will, then we’ll have another iPad killer on our hands.

So, would you consider getting the Galaxy S 2 or Tab 2, or are you looking forward to any of the other top tablets set to debut this year?

Well, it looks like we can put most of the Motorola release speculation to date, as CEO Sanjay Jha said...