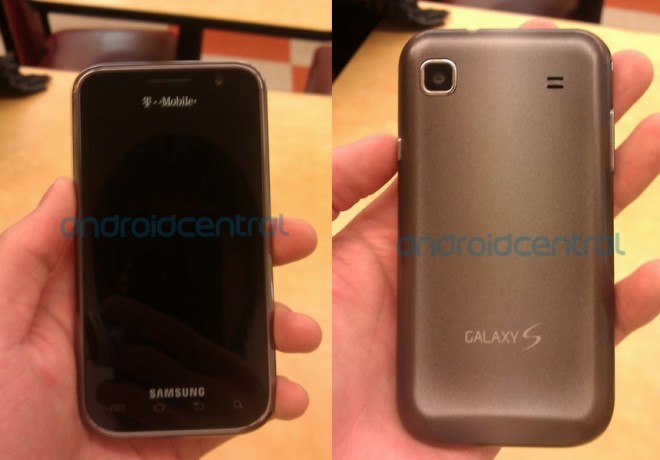 We honestly didn’t need to see the Galaxy S 4G to believe that it’s essentially a T-Mobile Samsung Vibrant with a 4G HSPA+ radio within and some original Galaxy S features thrown on, but we’re not going to turn down a chance to see the upcoming HSPA+ capable handset in the flesh. New leaked pics show the Android-powered smartphone hanging out in the wild, and we couldn’t be happier to see it.

While this is the first time we’ve seen the handset in the buff, we can’t help but feel the tingle of a bit of deja vu. With the exception of the front facing camera, you could squint your eyes till they bleed and not find anything different on the front side that doesn’t look exactly like the original Vibrant. We know it’s innards are where there party is, as the handset can pull down 21Mbps on T-Mobile’s 4G HSPA+ network, and that the Galaxy S 4G ships with Android 2.2 out of the box.

We’ll try not to say things we can’t take back, but it looks like Samsung is moving away from their reliance on using cheap-looking plastics. Well, judging from the back of the Galaxy S 4G, I rather like the matte-like back on the device. It beats out the shiny, somewhat cheap-looking back plate of the original Vibrant, and kind of reminds me of the Bronze G1’s back plate. The two-tone look is a nice change for the Galaxy S line, and for the better. We also hope to see Samsung packaging an additional back plate for the handset in the  retail box, as we saw with the original T-Mobile Samsung Vibrant.

Turns out, this upcoming Samsung smartphone isn’t really all that different from the Vibrant. But then again, we shouldn’t have expected much of a change from the original. T-Mobile and Samsung must have known this, which leads me to believe they decided to name the handset the Galaxy S 4G instead of the Vibrant 4G, despite the fact that we’ve seen the latter name pop up before. Make the customer believe there’s much more to be desired with the new version, even if it’s just a tweaked version of the original with some HSPA+ guts. Genius!

We don’t have much longer to be able to get our hands on this thing, as we expect to see the handset hit Magenta’s shelves on February 23rd.

Motorola Atrix, Droid Bionic may have power issues that will delay launch [Update]

Uh oh. The Motorola Atrix 4G and Droid Bionic are two of the most highly-anticipated devices of the year but...