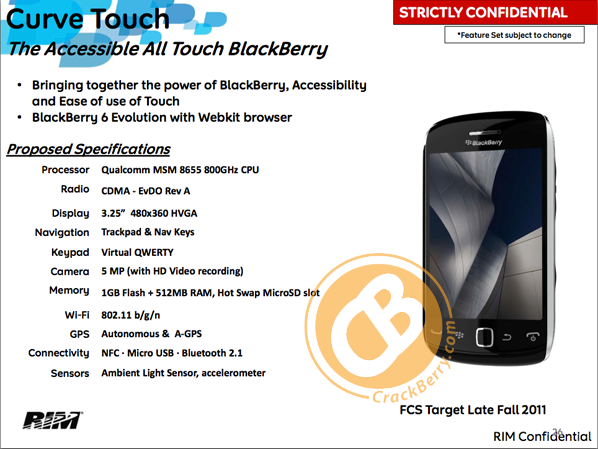 The other week, we got a good look at a variety of new BlackBerrys coming down the pipe, but as per usual, GSM carriers will be the first ones to the party. CDMA carriers won’t be completely left out though, and they’ll even have one handset that the GSM guys won’t – the BlackBerry Curve Touch, code-named Malibu, according to a big leak outlining RIM’s roadmap.

Although it looks an awful lot like a new Storm, like the Monaco that has been spied for some time (and is also on the CDMA roadmap), the Malibu will be a different handset altogether.it’ll have a smaller 3.25-inch HVGA display, 5 megapixel camera, 512 MB of RAM, 800 MHz processor, Wi-Fi, GPS, 3G, and NFC (or near-field communications, for contactless transmission). Given the identical screen size to the Storm, it’s a little funny that the Malibu will be branded as a Curve, but if it’s skipping the SurePress clicking touchscreen as we expect, then we can’t really blame RIM or the carriers from wanting to get away from the bad stigma surrounding that brand. Still, I’d go with a brand new name altogether rather than confuse customers who already have some notion of what a Curve is “supposed” to look like.

Anyway, it’ll be landing in late Q4. Other previously leaked devices, like the Curve “Sedona”, the Storm 3 Monaco, and Bold “Montana/Dakota” are tentatively scheduled for mid and late Q3. The roadmap also confirms that both the Sedona and Montana will launch with a mobile hotspot feature. About time, am I right? We had heard that a new Storm would have this feature, so it’s good to see it wasn’t axed altogether. The CDMA BlackBerry PlayBook tablet is due to drop Q2, just a little after the GSM version set for this quarter. 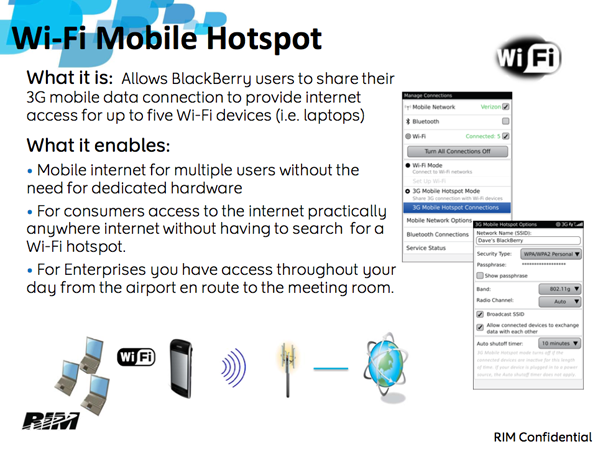 Beyond that, we have a deeper dive into OS 6.1, which is launching on all of the above devices. The biggest new feature is augmented reality support like we heard about at the official announcement, since all of these new handsets have digital compasses installed. Layar, Wikitude, and Poynt apps are all named in the slide, so we can probably expect something from them at launch. 720p HD video recording on the new 5 megapixel cameras is also mentioned, along with shiney new OpenGL 3D graphics rendering for better-looking games, while 24-bit graphics will now be used on the 2D side of things. Better home screen handling as seen a few days ago is also confirmed, but one new thing is an improved virtual keyboard. RIM’s finally consolidating the Sym and the # into one, so you’re not left trying to remember which one has that square bracket anymore. There are also a few tweaks in the visuals to improve usability. The rumoured voice function in universal search has also been confirmed, which will be a nice addition so long as I can map it to a convenience key.

There’s a lot going on here, but the main thing is the Curve Touch making its first appearance and a smattering of new OS 6.1 features. The Curve Touch will be an interesting mid-range alternative to the much beefier Monaco, but if both are sitting side-by-side at Sprint or Verizon, I have a hard time seeing someone pick up the smaller one unless there’s a really significant price difference. Anyone excited by what they’re seeing here?

We've known, for quite some time now, that Rupert Murdoch was going to launch an iPad exclusive newspaper called "The...