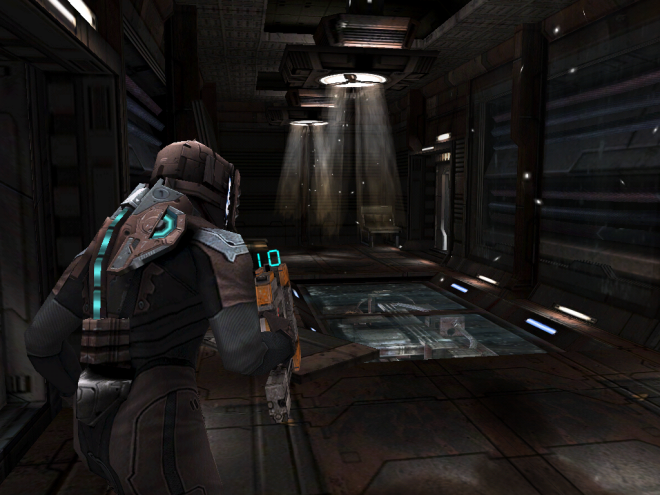 When I heard Dead Space for iOS was going to be released to fill the gap between the console versions of Dead Space and Dead Space 2, I was a little skeptical as games like that usually don’t offer that great of an experience as they’re usually produced to take advantage of fans who want to know the complete story of a game. I mean, if EA wanted to tell the story between Dead Space and Dead Space 2, why not release it as a film or a comic? There’s a reason why EA decided to go with iOS and it was to show that a game like Dead Space could still be a terrifying and eye pleasing experience, even though it’s published on a “mobile device.” If you think games on mobile devices don’t deserve your time, then get that idea out of your head because Dead Space for iOS certainly does.

In the console & PC versions of Dead Space, you play as Isaac Clarke. In Dead Space for iOS, you actually don’t play as him, instead, you play as an unknown Engineer who is caught in the middle of a plot between the Church of Unitology and Earthgov. As you progress through the game’s story, you’ll learn who the engineer is and what exactly transpired while Isaac Clarke was out of commission. Trust me when I say his actions are just as important as Isaac Clarke’s in the Dead Space universe.

The first thing you’ll notice when you start playing Dead Space for iOS is how visually stunning the game is. All of the game’s levels, characters, and weapons have a high amount of detail to them. Dead Space also has some great lighting effects as lights will flicker and strategically illuminate a room to give the player just the right amount of lighting to be concerned of their surroundings. There will also be times when the lights are completely cut off and only emergency lights function. That’s when you know all hell is going to break loose. 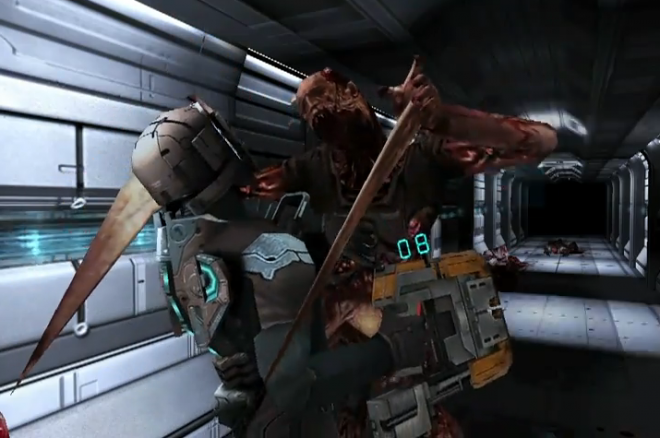 Let’s face it – it’s pretty much inevitable that you’re going to come across a Necromorph or two during your adventure in Dead Space. You know it; I know it; the Necromorphs know it. Thankfully, you’ll be given a number of weapons, some which are exclusive to the game such as the Plasma Saw. Unlike the console versions of Dead Space, you won’t purchase weapons in stores. Instead, you’ll stumble onto them as you progress through the story. I thought this was a good move since picking up schematics and then purchasing weapons could make the Dead Space iOS experience a little longer than it has to be. The stores in Dead Space iOS serve as more of a way to purchase ammo, suits, sell items in your inventory, and purchase DLC. Aside from the stores, you’ll also be able to upgrade your gear from benches in the game which require power nodes which can be found in the game.

The Necromorphs you’ll be facing off against in Dead Space iOS are pretty much the Necromorphs that have been featured in the console games. And just like those games, the trick to defeating them is to cut off their limbs. No matter what your tool of choice is, all of the Necromorphs’ limbs fall off independently as you would expect and the more limbs you cut off, the weaker the Necromorph becomes. I’m glad to see EA was able to deliver the limb decapitating experience that gamers expect from a Dead Space game in this version as I feel that’s one of the series’ charm. Once you cut off the limbs of a Necromorph and use it against them, you’ll never be the same again.

The controls in Dead Space iOS took some getting used to although after 10-15 minutes, it felt as natural as playing the game on console is. You move your character with the left side of the screen while controlling the camera with the right side of the screen. In order to pull out your weapon, you tap the right side and tap again to shoot and to initiate your weapon’s alternative attack, all you have to do is tilt your device. When you come up to a point of interest, such as a door, weapon, or container, a small circle will appear over it indicating you can tap the screen in order to interact with it. Melee and stomp attacks can be performed when a Necromorph is within distance as a prompt will show up on screen indicating the attack can be made. It all may sound like a lot to take in, but believe me, after some short time with the game, it’ll become second nature. 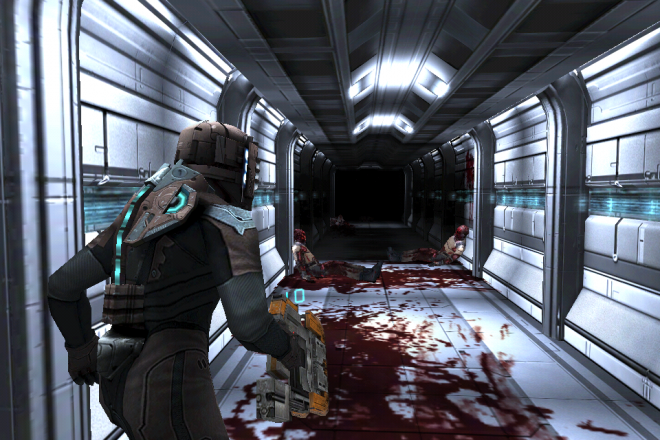 I usually don’t comment on the audio of a game unless it’s something worth noting, and I have to say, that the audio in Dead Space iOS was superb, especially when wearing headphones. The game does an incredible job of using musical cues to inform the player of when a Necromorph is in the area that every time I heard it, I would get panicked and start looking around wildly for any threats. All of the weapons, enemies, and even the footsteps gave off a sound that made the experience feel that much more real.

FINAL THOUGHT: I feel EA Mobile successfully delivered on a Dead Space experience on iOS. There were moments where I was caught off guard and nearly threw my iOS device out of my hands, and I’m sure that’s exactly the reaction EA Mobile wanted to get out of players. The lighting, sound, and superb graphics work together to orchestrate one of the best gaming moments I’ve ever had on my iPad and iPhone. I not only recommend Dead Space, I urge you to pick it up as it’s one of those games that can instantly turn any mobile game skeptic around in minutes.

The latest phone shipment numbers are out from IDC and you have a few familiar faces at the top but...