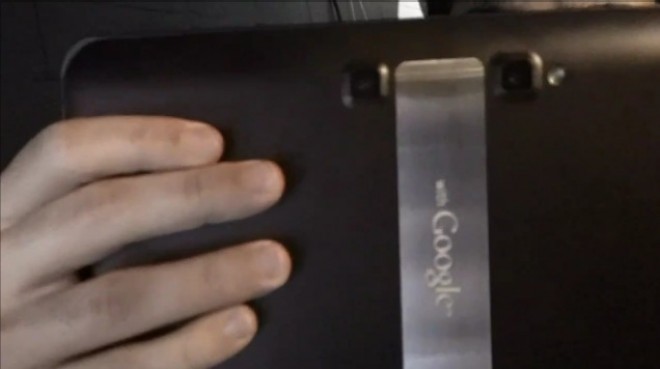 For those of you just waiting for a glimpse of the T-Mobile G-Slate, your wait is over. Sadly, we’re quite literally given just a glimpse of the Android tablet, but one thing is confirmed: it will feature dual-cameras (stereo cameras) on the back side.

Just like the handset a source of ours recently tipped us to, which turned out to be the Optimus 3D, the G-Slate will sport dual cameras on the back for capturing 3D pictures and videos. The Optimus 3D, however, will have a 3D display. We’re still not sure if a 3D display will find its way to the G-Slate, but anything is possible. Will LG deploy their glasses free 3D display with their very first tablet, or will they wait and see how the Optimus 3D sells before making the jump?

The video is about 4 minutes long, and only shows the tablet for a few seconds, so we suggest fast forwarding to the 3:35 mark to get your fill. While it’s only a few seconds, that’s more than we’ve seen before, so we’re thankful for that. If the leaked document we saw before turns out the be true, we still have about two months before we’ll see the thing hit shelves, so revel in the few seconds in this video.

The Android tablet competition is heating up, and the two best upcoming tablets we can think of are the G-Slate and Xoom. Of course, there are still some other tablets that we have our eyes on as well. For now, we’ll just have to wait, and hopefully Google’s Honeycomb event will distract us enough to momentarily forget the rumored release date of the G-Slate.

So what do you think, dear reader? Do you care about the two cameras on the G-Slate, or is it simply a fad?