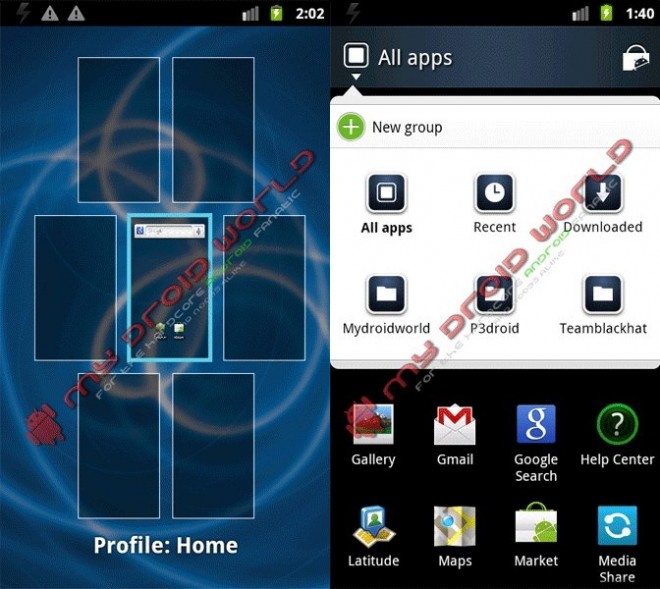 It’s a good day to be a Droid X user, as some screenshots of the handset’s upcoming Android 2.3 Gingerbread update has been spotted, making it the first glimpse of Gingerbread for a handset that’s not the Nexus S or the Arc – custom ROMs notwithstanding.

This Gingerbread ROM looks to bring with it the Motoblur UI. Still, the Gingerbread update looks quite nice from what we can see at this point, and you can tell that Motorola Mobility is working hard to make their custom skin as powerful as can be. Motoblur may never look as sexy as HTC’s Sense UI, but functionally in Motoblur is still impressive.

You may not like Motoblur, and we hear you on that front, but there’s more than enough to love about this pending Gingerbread update. Gingerbread should step up the aesthetics for the OS as a whole, but it’s not clear how much of the new UI design will shine through the custom skin. We can see the new notification bar, which is now a stark black instead of a pale gray, but other than that, it looks like a whole lot of Motoblur.

Nonetheless, the Droid X is still one of our favorite devices on Verizon, and it’d would be hard not to love the phone for any reason. Luckily, Gingerbread on the Droid X will likely be a hit, we just wish we knew when to expect it. It may not be long now, though, as it’s obviously in the hands of MyDroidWorld at the moment. Who knows, maybe a system dump will land somewhere soon, so users may be able to enjoy the goods sooner rather than later.

There’s still more to see on the Droid X’s Gingerbread update, so we’ll keep official opinions to ourselves.

Hit up the link below to see more screenshots!