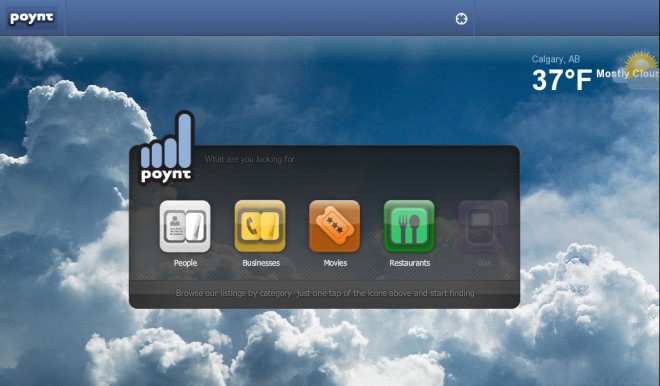 We saw a glimpse of the Poynt application running on the BlackBerry PlayBook at CES, but how would you all like an extra taste? Although the app is still a work in progress prior to the tablet’s launch, everything looks polished and functioning; just like the smartphone app for BlackBerry, you can look up people by name, phone, or address, search for businesses in the Yellow Pages, look up nearby movie times and see their reviews, and scope out restaurants in your neighbourhood. It looks like the gas prices feature isn’t implemented quite yet, but weather’s there, chilling out in the background. Recently, the mobile app added support for event lookups, which I’m sure will find its way to the PlayBook sooner or later.

The interesting thing about Poynt on the PlayBook is that there’s no GPS on the tablet, and for a location-based search app, that’s kind of important. Will it use Wi-Fi positioning, or suckle some coordinates from a BlackBerry smartphone’s teat using Bridge? One would hope that the WiMAX version coming to Sprint will sport some GPS, since the PlayBook really is a good size for providing turn-by-turn directions to drivers (a feature Poynt sports for just about any result you pull up).

So far, a lot of the PlayBook apps I’m seeing aren’t really instilling me with a lot of confidence; it looks like they’re as bare-bones as possible so devs can just get their free tablet and be done with it. It’s good to see long-time RIM partners like Poynt really going to town and make a smooth app that proves the PlayBook is a viable platform for mobile devs. One of the first serious apps that got previewed was Fantasy Football, which also had a significant amount of polish, but I’m going to dig around and see if we can a few other shining examples.

RIM's ongoing negotiations with the government of India regarding lawful interception of BlackBerry data have hit a bit of a...