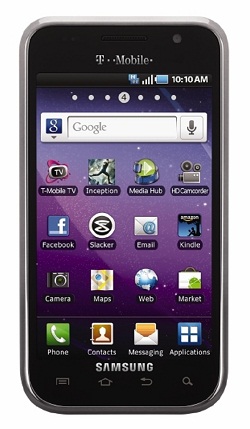 The T-Mobile Samsung Galaxy S 4G was announced a few weeks ago but the carrier was pretty mums on when we could expect the Android device with HSPA+ support to hit the market. Well, T-Mobile said it will be available in February, so it won’t be long before you can get this thing in your hands.

The Samsung Galaxy S 4G isn’t that much different from the Vibrant it replaces, as it still rocks the same 4-inch Super AMOLED display, 1-GHz Hummingbird processor, and 5-megapixel camera but it does have a few tricks up its sleeves. As the name suggests, it will be compatible with T-Mobile’s 4G HSPA+ network for 21 Mbps download speeds (that’s theoretical, but we’ve found real-world speeds to be quite good in strong coverage areas).

The Samsung Galaxy S 4G also one-ups most of the other Galaxy S lineup in the United States by coming with Android 2.2 Froyo. Of course, now we get to wonder when, if ever, it will get Android 2.3 Gingerbread.

The Samsung Galaxy S 4G will also come with a front-facing camera and Qik pre-installed, so you can make video calls on the go. At least, that’s how it’s supposed to work. During our review of the latest myTouch, we found the on-the-go video chatting to be a super hit or miss thing.

Other than that, you have a bunch of preloaded software like doubleTwist with its AirSync feature for syncing tunes over WiFi, Slacker Radio and it will also come with the movie Inception.

Yeah, I don’t know why the companies are pushing the fact that it has the Inception movie preloaded so hard (just as it did with the Vibrant and Avatar) because that is a made-for-a-big-screen picture. The Super AMOLED screen is nice and all but you really should experience that movie on a big-screen, high-definition television if you can.

There’s no word on the price yet but we’d expect this to fall land at the $199 mark with a new, two-year contract. You can go to this T-Mobile site to sign up for more details.

If you've got an Xperia X10 in your pocket, one of the features you likely noticed immediately after firing up...