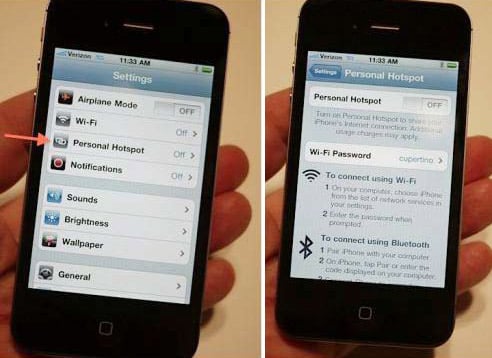 Verizon’s iPhone 4 should ship with Personal Hotspot capability out of box which is an advantage when compared to the version AT&T sells. Or at least, it will be an advantage until AT&T enables the same functionality, too.

According to the first reviewers of Verizon’s iPhone 4 — Walt Mossberg and David Pogue — AT&T’s iPhone 4 will get the same mobile hotspot capability on February 13th. This new feature comes included with the iOS 4.3 which is already available for developers in its third beta iteration.

In the meantime, many iPhone 4 users jailbroken their devices, installing MyWi to turn their 3G connection into a hotspot. No longer will you have to pay for the benefit – the mobile hotspot is just another option of the iOS and you’ll only have pay for all the data used, but that’s a given.