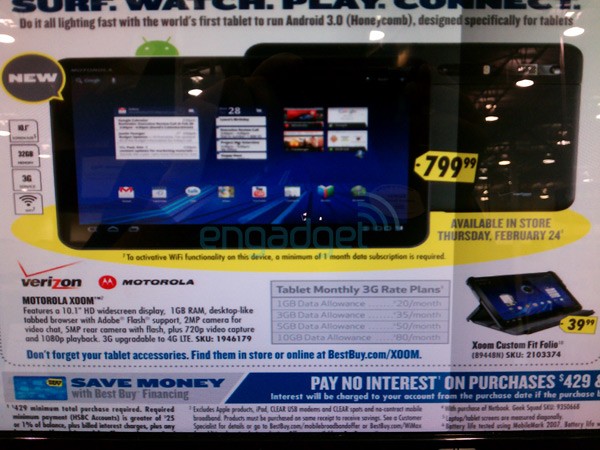 The Motorola Xoom seemed to be almost everything anyone could have wanted in an Android tablet at this point. It will be running the tablet-optimized version of Android, Honeycomb, and sports a dual-core processor. Could it possibly do any wrong? Yes.

According to a leaked Best Buy ad for the Xoom, this not-so-little tablet is going to run for $800. Let me spell that out for you: eight hundred dollars. For that kind of dough, you can buy a very capable Windows laptop, and for $200 more you can spring for a MacBook Air. Who on earth would fork over $800 for this thing when every single current iPad version except for the 64GB 3G version is less than that?

Moreover, we’re hearing that Wi-Fi will be locked down for the first month at Verizon. What does that mean? The leaked Best Buy ad says the following:

“To activate WiFi functionality on this device, a minimum of one month data subscription is required.”

Now that you’ve picked yourself up off the floor, you can feel free to rant and rave in the comments about this move. But before you do, it’s worth considering that this just might be something Best Buy is doing – not necessarily Verizon. Best Buy does have to activate these in order to sell them, and perhaps it’s an incentive to activate the Xoom with a data package that’s good for at least a month (afterward I’m guessing there might be a cancellation fee?).

Even if the Wi-Fi issue wasn’t a problem, it’s the fact that the hardware itself is priced sky high. This makes us feel a bit jaded whenever we’re constantly reminded that these new tablets will be priced “competitively.” What exactly is it competing with?

The Motorola Xoom is set to launch February 24 according to the Best Buy documentation, but don’t go running to retail stores all at once now.

TeleNav GPS application will be available for Verizon Wireless' iPhone 4 users on launch, offering a free month of turn-by-turn...