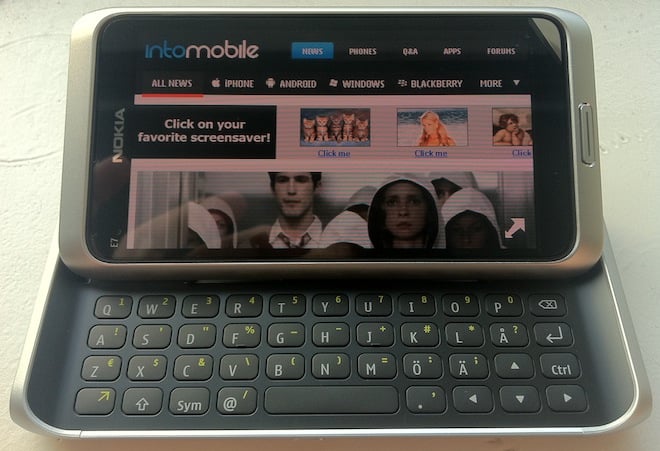 Thanks to Twitter user @Sheridan01 I just got about 20 minutes of hands on time with Nokia’s latest superphone, the E7. I’ve never seen the device in person before, so with that in mind here are some first impressions: for a device with a 4 inch screen, it’s surprisingly small. It fits in the hand extremely well and the materials are top notch. The sliding mechanism is solid and unlike the N97, which felt like it would fly out of my hands every time I wanted to use the QWERTY keyboard, the E7’s latch opened with just the right amount of force. Speaking of the keyboard, the keys are a little bit on the small side, but I’m sure that with time one could get used to them.

How’s the operating system? Well … this time last year I finally gave up my Nokia E71 and switched to the Google Nexus One. Then in September I got an iPhone. Navigating around Symbian felt foreign to me, but only because I’m no longer used to it. It seemed responsive enough, but again, I only had 20 minutes with the damn thing so I can’t say for certain whether I’d make it my main device. Once turned on the E7 identified @Sheridan01 by his SIM card and automatically started syncing all of the settings from his Nokia account. Do Android devices do something similar or are you forced to enter your Google credentials when getting an a new Android device?

The screen is nice, but you can most definitely discern the pixels. The touch screen element seemed responsive to my swipes and tap and the few images that came preinstalled as wallpapers looked more than adequate in terms of color reproduction and black levels. If you can’t tell by now, I’m a pretty terrible phone reviewer. Texting, calling, browsing, Google Maps, those are the only things I seem to do with a handset these days, and the E7 isn’t really going to make me switch from my iPhone 4 now that I think about it.

Here’s hoping Nokia makes a device in 2011, probably loaded with MeeGo, that makes me feel that all too painful gadget lust that makes everyone’s wallet just a little bit lighter.

Update: Price? 599 Euros if you preorded it, otherwise 630 Euros. Where to buy it? The Nokia Flagship Store in downtown Helsinki. Nokia is also saying that it’s shipping today, so it might be at a store near you rather soon.

Rumors are circulating around the internet that Nokia's new CEO, Stephen Elop, who has been on the job since September...