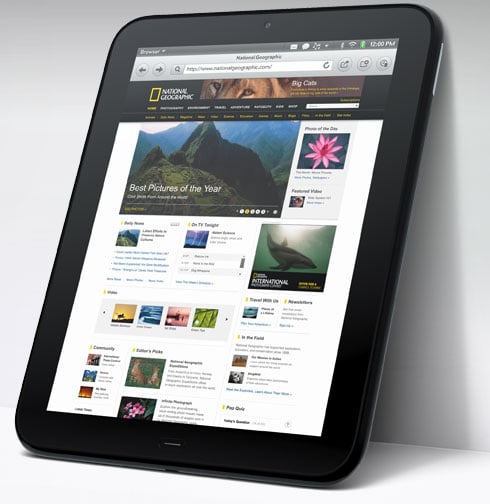 HP kicked off its foray into the world of webOS with three new devices including the HP TouchPad, a luxuriously sized 9.7-inch tablet. The TouchPad will include a 1.2 GHz dual-core processor from Qualcomm, a capacitive touchscreen display with 1024×768 resolution, 512MB RAM, 1.3-megapixel webcam, WiFi 802.11b/g/n, Bluetooth, 3.5 mm headphone jack, 16 or 32 GB of storage, and a microUSB charger. The TouchPad will also include a home button and LED notifications. Good news for tablet fans as the device will be the first in a family of devices sold under the TouchPad brand.

The TouchPad will include several tablet-friendly features such as a multi-pane email client, a virtual keyboard with dedicated number row and productivity apps such as QuickOffice, Dropbox, and more. Executives will appreciate the VPN support, video calling and wireless printing. For the general consumer, the TouchPad will feature full Adobe Flash support, games, music syncing, and Beats audio sound quality. Accessories include a wireless keyboard, a Touchstone charger dock, and a lightweight stand case that is compatible with the charger dock.

At first glance, the TouchPad appears to be an excellent offering from HP Palm and a nice alternative to the Android tablets that are starting to flood the market. The first version of the TouchPad will be WiFi-only with 3G and 4G models to be released later this year. Unfortunately, you won’t be able to touch the TouchPad for several months as the tablet is not expected to debut until this summer. Pricing is yet to be determined.

It’s official: HP Pre 3 with webOS is coming this summer