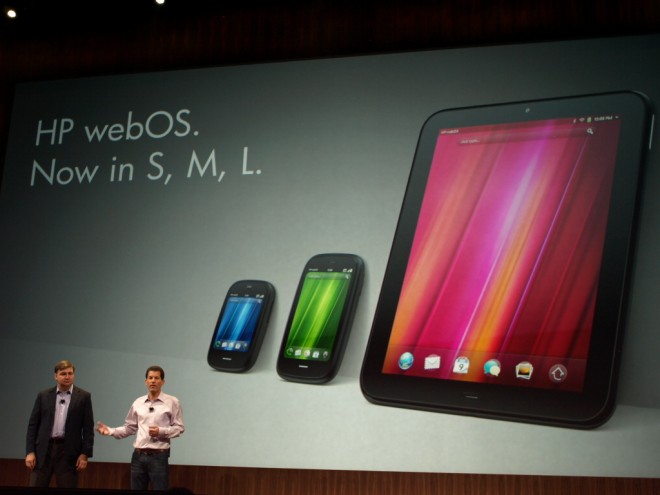 This morning Palm HP announced three devices, spanning from the teeny-tiny to the reasonably huge. At the lower end, there’s the Veer, which sports a 2.6-inch display and a slide-out QWERTY keyboard, complete with HSPA+ connectivity. Then there’s the Pre 3, which boasts a bigger display than its predecessor, and a much sharper resolution. The most interesting of the bunch was the first webOS tablet, which they called the TouchPad. It clocks in at 9.7 inches, has a front-facing video camera, 1.2 GHz dual core processors, 1024 x 768 screen, Wi-Fi b/g/n, and has both 3G and 4G versions coming down the pipe. It also has a neat Tap to Share feature where you can just touch your webOS phone to the tablet to share web pages and the like.

This is the first major announcement HP and Palm have made together since they merged, so the IntoMobile team has a few things to say about it

I’m really glad that HP is now in a position to push webOS products on a much larger scale than Palm would have ever able to on their own, but if this presentation made anything abundantly clear, it’s that the Palm branding is very quickly going to be a thing of the past. As sad as that may be for some of the diehards, the new products are significant iterations on what Palm has done in the past, and the tablet, though more or less following trends from the competition, will ensure they’re a part of the game in 2011. What HP will eventually be able to do before anyone else is bring their mobile OS to a full-blown computer, which was hinted at the end of the presentation. Only Apple is even remotely in that position, and even then, I think their standards are too high to make that a possibility in the foreseeable future.

There was so much buzz for this HP webOS event and I can’t help but feel a little disappointed. I feel like HP totally played it safe when it could have done something bold. The Pre 3 and Veer are evolutionary at best and seem like they’re just incremental upgrades of the Pre and the Pixi. The TouchPad looks pretty cool and nice but nothing really stands out to me besides webOS.

It won’t land until summer, so by that time we’ll have a second iPad, multiple dual-core Android Honeycomb tablets and the BlackBerry PlayBook. The TouchPad seems nice but nothing about it makes me really want to have it over the plethora of competition. The touch-to-share is neato burrito but I’d rather just hit a button to share my content between devices like with Chrome to Phone. We still don’t know how much this thing will cost either, so that’s another big question mark.

Still, HP has been able to generate a lot of buzz and excitement about webOS and we don’t have to worry about it running out of money any time soon. That means webOS will be here to stay for a while and it will be on a plethora of devices.

The Pre 2 isn’t a surprise, of course, since we heard of its coming in October and it’s already available in other parts of the world. It is odd that it goes on pre-sale for Verizon tomorrow and the Pre 3 will be available this summer. I’d definitely hold out for the latter if I wanted a webOS device. The Pre 3 isn’t all that groundbreaking, but the 1.4GHz Snapdragon processor is a cool addition. webOS is an elegant platform and all that firepower will only help. The real show-stopper is the TouchPad, which many are touting as a real competitor to the iPad. Indeed, in terms of size and specs, it’s much like the Apple tablet. The demos at HP’s event went smoothly and it looks like a solid tablet – the only dealbreaker right now is the availability of great apps. Overall, HP impressed me but failed to wow me. I won’t be rushing out to buy a webOS device any time soon. It’s all about the apps for me.

webOS 2.1 is now more mature and polished than ever before – and webOS has always been the only mobile OS to hold a candle to the iPhone’s iOS in terms of usability and visual appeal. webOS 2.1 takes the tried and true formula of integral multitasking and eye-candy UI and bumps it up a few notches with cool new features like integrated social network messaging, HD video recording, and card “stacks.” The Palm Pre 3 and the TouchPad are likewise impressive. Finally, we have webOS hardware that can keep up with the OS itself – Palm and HP are finally ready to bring the pain to Apple.

HP announced some exiting new products today, but fell short in some ways I was looking forward to. I was really hoping for some different smartphone hardware that escapes the existing portfolio, but that didn’t happen. I’m digging that the Pre 3 has a larger screen, but I’d have really enjoyed a handset with a 4 inch display, possibly larger. We’ve seen how nice WebOS can look on a 9.7 inch screen with the TouchPad, I wish they could scale their handsets up a bit more as well. Nonetheless, I’m pretty impressed with what was announced today, but I don’t plan getting a TouchPad anytime soon. HP didn’t miss, but they didn’t hit it out of the park, either.

HP announced several new devices today including two handsets and a
tablet. While the tablet holds some promise, HP’s new smartphones are run-of-the mill offerings that do little to advance the platform. The Palm Pre 3 is a notable hardware upgrade to the Palm Pre 2, but it still shares the same form factor which is the Pre’s worst feature. I
was hoping for something more striking like a webOS version of the DROID X and not just a re-hash of the previous Pre models.

The TouchPad is an interesting slate device, but its late tentative shipping date of “summer” sours me on the tablet. I enjoy webOS as an operating system, but I doubt that I can hold out another five months waiting for a tablet when the Motorla XOOM, the LTE Galaxy Tab and possibly the iPad 2 may be already be on the shelves of retailers worldwide. I had high hopes for HP and webOS prior to this event, but I think the less-than-stellar smartphone lineup and the late delivery of a tablet will hurt HP’s ability to be competitive in the consumer market.

Hands-on: HP TouchPad – The webOS tablet aims to take the iPad down

Hopefully, you were following our live blog earlier today and you'd know that HP just introduced the webOS TouchPad to...