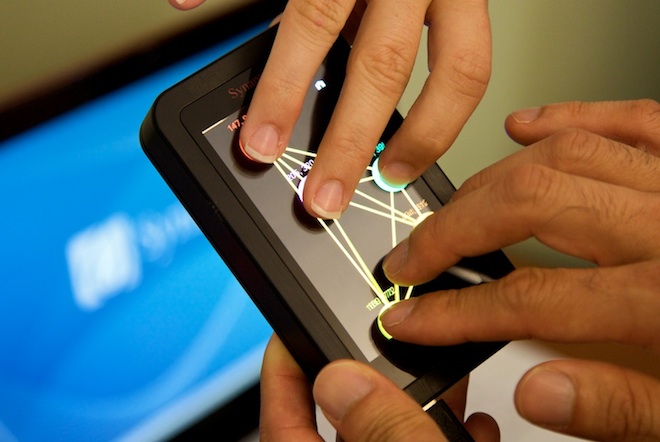 That screen you love to poke, prod, and swipe, is made up of several components that the average man on the street shouldn’t even care about, but we do for some strange and slightly odd reason. The first and most obvious is the screen itself, usually either LCD or OLED, the latter becoming more common these days. That screen needs to a display driver for it to work. Think of a display driver as the chip that takes what’s coming out of a graphics processor and then translates it to something the screen can actually show. Next is the touch element, which sits on top of the screen itself. That’s the actual thing you fiddle with when trying to bang out a text message on a sheet of glass. The touch element needs a dedicated chip to process all the taps and gestures you give it, so if you’ve been counting we’re now up to four components. Recent advances in screen technology, such as Samsung’s Super OLED, have fused the touch panel directly with the screen, and today Synaptics is announcing that they’re combing the display driver and the dedicated chip a touch panel needs to work into a single chip solution; they call it “ClearPad Series 3“.

Why is this important? The previous solution that required four components now only requires two. Less parts equals faster production, improved performance, less space needed on a logic board, and thinner devices. Dr. Jennifer Colegrove, Vice President of Emerging Display Technologies at DisplaySearch says: “The worldwide market value of touch screen modules will reach about $14 billion in 2016, from $4.3 billion in 2009.” So you can see why Synaptics is really excited about this. They want to have their hardware inside anything with a touchscreen, and with innovations like ClearPad, they’re well on their way of achieving that goal.