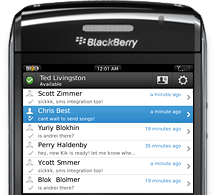 A few months ago, RIM pulled a growingly popular app, Kik Messenger, from BlackBerry App World, revoked their access to the software development kit, and sued them for patent infringement. Kik Messenger basically aimed to deliver BBM-style functions, namely notifications for received and read, across multiple smartphone platforms. Today, a document outlining their defense against (and the nature of) RIM’s case has come to light. You can take a look at the whole PDF, but here’s the short, non-legalese version.

Some of the things RIM is calling upon against Kik are pretty nit-picky, like using the term BBM, or having a vaguely similar logo to the BlackBerry Messenger app. The more serious stuff are the allegations that Kik Messenger’s CEO, Ted Livingston, had access to BBM source code during his co-op terms at RIM, and insinuated he used some of it to make Kik.  The counterclaim says Livingston never had such access, and goes on to contest RIM’s patent claims on grounds of lacking novelty, obviousness, being overly broad, lacking in specificity, or of being non-patentable subject matter.

The most interesting part of this for me is how Kik highlighted all of the ways in which RIM was promoting the app and wanted it to be a shining case study for the BlackBerry Social developer platform, and then seemingly without warning turned around and sued them. Getting pulled from App World wouldn’t have seemed so fishy if RIM hadn’t been as chummy with Kik as they had been in the past. It’s not entirely uncommon for people who work for device manufacturers or platform developers to go off and launch their own apps, but this is the first time I’ve heard of disagreements between two such parties escalating this much. I’m looking forward to seeing who wins the case in the end; I’m still not entirely convinced that RIM is as much of a bully as Kik is making them out to be.

Our Norwegian friends at Opera Software have released their latest State of the Mobile Web Report, an analysis of data...