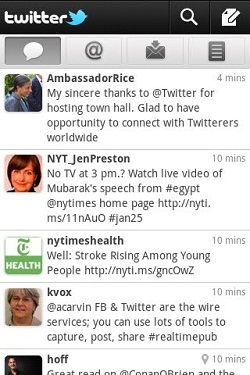 Judging by the leaks we saw earlier, it’s not much of a surprise to see an updated version of the official Android app and it boasts a a refined user interface, additional search capabilities and more.

We liked the look of the original Twitter Android app even if it was a bit cutesy, but the new version has a splashy new design. Much of the blue is gone throughout the setup and the company described it as:

When you first sign in, you’ll see your timeline, along with icons along the top that let you view @mentions, messages, and lists. This layout makes it fast and simple to navigate Twitter on your Android device. Also, the @mentions tab now includes Retweets; seeing replies and Retweets in one place offers a quick way to better understand which Tweets are sparking interest and engagement. In addition, we introduced auto-complete for usernames.

The official Twitter Android app also received a boost with its search feature. The company is calling this “Universal Search” and you lets you get some granularity in what you’re looking for.

You can toggle between separate categories for what you’re searching for – if you search for “cars” you can choose between those who have that in their tweets, names and you can even search by proximity. The official Twitter Android app also lets you use the service without signing in, as you can still view trending topics from a variety of subjects.

Hit the link below to get the new app directly shot to your device thanks to the new online Android Market. As for me, I’ve been using Twidroyd a lot lately and have been digging it, but I’ll definitely give the official app a chance.

What’s your favorite Twitter app? Let us know in the comments.

Forget all the rumors and hearsay about the Verizon HTC Thunderbolt being a Best Buy exclusive or launching next week...