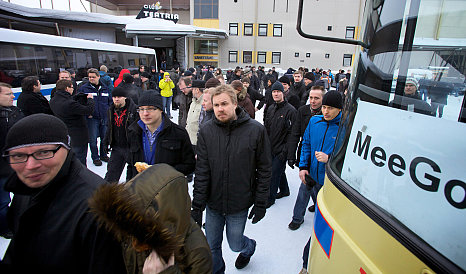 Reports from Finland say Nokia employees are walking out on work and taking the day off in protest of Windows Phone effectively replacing Symbian as the company’s primary OS. Just to give you an idea of how widespread the panic must be internally, Nokia’s Oulu office has a little under 2000 employees, about 1000 of which work on Symbian, and another 600 on MeeGo. Tampere has 3000 employees, with fully half working on Symbian. No doubt many on the inside saw this coming, considering the memo CEO Steven Elop sent out a few days ago, calling the OS a “burning platform”. And obviously Windows Phone seemed a likely candidate considering Elop’s history with Microsoft.

This is pretty much the reaction I had expected of employees from the get-go, and can you really blame them? Nokia has spent so much time, energy, and money into keeping Symbian alive all of these years that a hefty chunk of their workforce is dedicated to the platform. Nokia will still ship 150 million Symbian handsets before pulling the plug, and even after that, Nokia will still need software people working on Windows Phone software, but way fewer if the company won’t be wholly supporting the OS.

It will take awhile before we see Nokia really starting to trim the fat, but I imagine many employees are already looking for a new line of work. That being said, this is a prime opportunity for other manufacturers in the area, like, say, Sony Ericsson to pick up some new blood. RIM’s looking for some new people to work at TAT in Malmö, too. Jussayin’.

There is so much going on in the world of Nokia this morning with its new Microsoft partnership. In the...