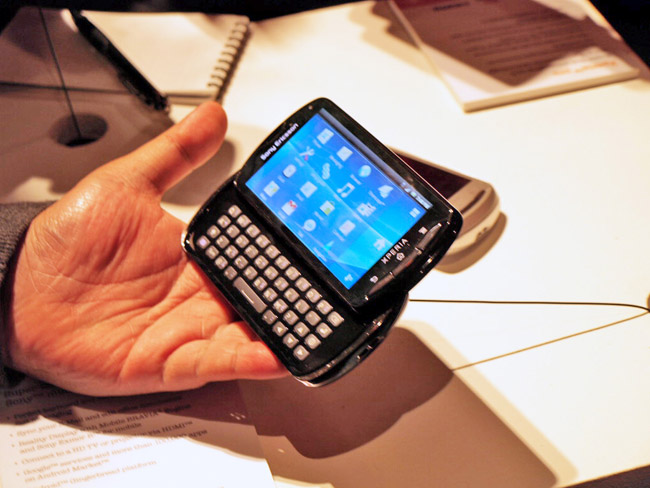 You could simply think of the newly announced Sony Ericsson Xperia pro as the neo with a keyboard. The specs are identical and the only difference between the two (aside from the keyboard) is found in the optimized for landscape view UI. According to Sony Ericsson, we should expect some kind of a “smart UI” which responds to the use of keyboard. As an example Sony Ericsson pointed a situation in which you read an email and slide-out the keyboard only to get the reply screen appearing automatically. I guess there’s more to it cause I don’t see other reason to postpone the device launch till the second quarter — neo will be available at the end of Q1 2011.

In addition, the Xperia pro also comes with a full document editor, most likely QuickOffice, unlike the neo which settles with a document viewer.

The notable specs include two cameras (8-megapixel on the back and 2-megapixel on the front), awesome 3.7-inch 854×480 pixels (FWVGA) Reality Display with Mobile BRAVIA Engine technology, HDMI out, HSPA, WiFi and so on. As for the size, with dimensions of 120x57x13.5 mm and weight of 140 grams, the Xperia pro is comparable to the Motorola Droid 2 and slightly more pocketable than the HTC Desire Z (T-Mobile G2).

The Xperia pro will be available in three color options — Black, Silver and Red — and I had a chance to see all of them at display. I find the silver version to look the best, but that’s just a matter of personal preferences.

Before I leave you off with photos you probably want to know how’s that keyboard doing. In a word – great. I would say it’s on par with the HTC Desire Z, though it’s not as wide…