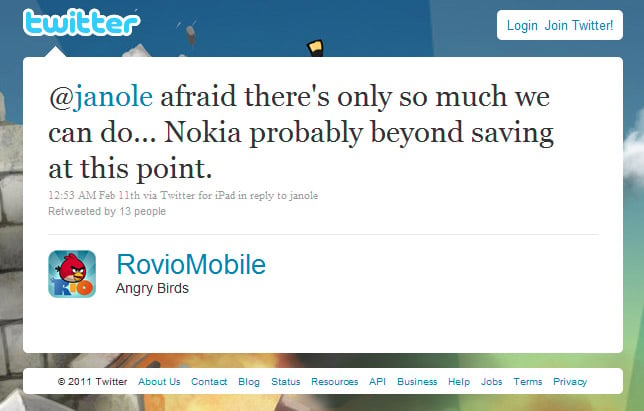 Angry Birds developer Rovio seems everything but bullish on Nokia’s future, despite the new deal between the Finnish company and Microsoft. Here’s the whole story:

The discussion went on with janole suggesting Rovio could buy Nokia in a year or two, to which they replied: “yes, we need more space and the Nokia House is very nice.”

Of course that ain’t gonna happen anytime soon, but Rovio’s voice is heard in the mobile industry. After all not many games are turned into board games and animated series. Moreover, we don’t get to see mobile game developers teaming-up with major studios like 20th Century Fox every day…

Angry Birds is available on a number of platforms, including iOS, Android and Symbian S60. Rovio said that the game will be released for Windows Phone 7 devices, too.

iControlpad pre-orders go live; Could be yours for $74.99

iControlpad, the iPhone and iPod Touch accessory that promised to deliver better mobile gaming experience is finally available for pre-order....