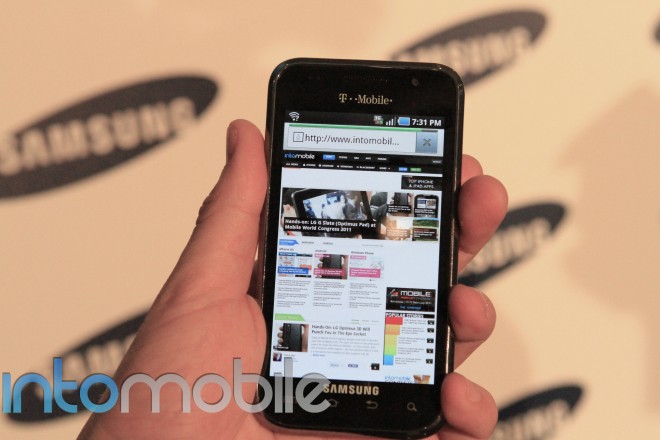 T-Mobile’s fastest HSPA+ 4G handset, the Galaxy S 4G, is both familiar and new all at the same time. The only difference between this device and the original Galaxy S and the Galaxy S 4G is, well, the 4G part, but that doesn’t mean there’s less to love about it. We finally got some hands on time with the blazing fast Android handset, and while changes are subtle, we’re impressed with T-Mobile latest handset.

The Galaxy S 4G looks exactly the same as its predecessor, the Samsung Vibrant. However, this time around, Samsung slapped on a front-facing camera for video chat, and support for T-Mobile’s HSPA+ network. The handset can achieve speeds up to 21 Mbps, easily besting the MyTouch 4G and G2, which can only get up to 14.4 Mbps. The super thin smartphone also features a new back cover that’s matted and monochromatic. If you’ve ever caught a glimpse of the bronze G1, you have an idea what to expect with the Galaxy S 4G, only silver. The back also features the bump on the back of the handset, which you’ll also find on devices like the Nexus S.

Like the Vibrant, the Galaxy S 4G sports the much-loved 4 inch Super AMOLED display, and even comes with the movie Inception pre-installed. All done up with rounded edges, the handset is very comfortable in the hand, even with the 4-inch screen. Speaking of the screen, I’m a bit surprised that Samsung didn’t add the Super AMOLED plus display with the GS4G, as that would help it stand out a bit more from the Vibrant itself. Either way, the Super AMOLED display is something to be admired, and watching videos on the 4-inch screen is down-right dreamy.

The Galaxy S 4G features the Samsung-made 1GHz Hummingbird processor, which is plenty fast in its own right, but may not appease those who are looking for a dual-core phone. You’ll also find a 5 megapixel camera (no flash) and a pre-installed 16GB microSD card that’s expandable to 32 GB. The GS4G may not be the top of the crop in terms of hardware, but it’s certainly nothing to dismiss.

The handset ships with Samsung’s custom skin, TouchWiz, which is very easy to use and nice to look at. It may lack some of the aesthetic appeal you’d find on HTC Sense, but TouchWiz is just as functional. The GS4G ships with Android 2.2 Froyo, so users will be able to see a significant speed boost thanks to the JIT Compiler, and view Adobe Flash content. The only thing we worry about is when the handset will receive the Android 2.3 update, as Samsung is still trying to push Froyo to their existing lineup.

Samsung provides a handful of custom applications and widgets for the user to personalize their handset with. One of our favorite apps is Daily Briefing, which aggregates your calendar, weather and the stocks you follow all in one place. There’s also a Daily Briefing widget you can throw on your homescreen, or you can set your alarm so that it will open right as you wake up.

There’s more to love about TouchWiz, but we’ll save that for the official review.

While the Galaxy S 4G may just be a slightly upgraded version of the existing Vibrant, the addition of the front-facing camera and blazing fast 4G support may be just what you’re looking for.