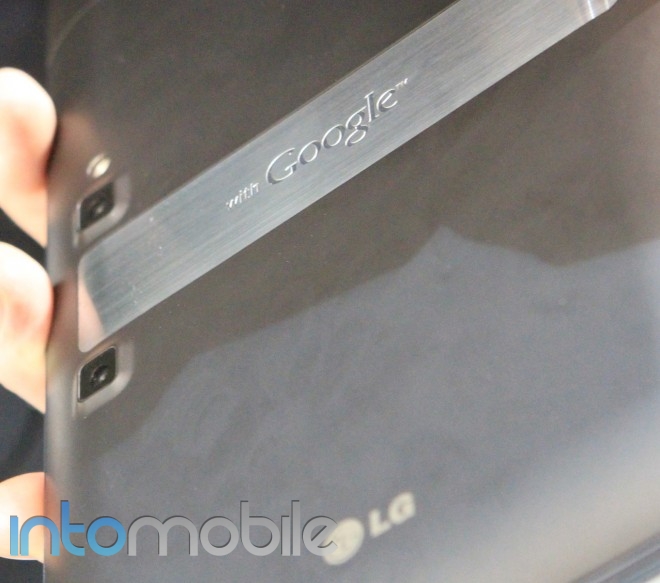 While LG officially announced the G Slate at CES 2011, we didn’t get a chance to see the thing in person … until now, that is. We got our hands on the LG G Slate, which will also be known as the Optimus Pad, and the 9-inch tablet may be something special.

The company made a big deal of saying that the 9-inch (8.9 inches, technically) screen is the perfect size for a tablet. Unlike the Galaxy Tab, the G Slate will have ample room for displaying media and unlike the iPad, the LG tablet will be capable of being held comfortably in one hand.

Well, that’s what they say, as I found it a hair too large to hold comfortably with one paw. Still, it has a nice feel to it and the NVIDIA Tegra 2 chip inside makes it smoking fast.

One thing I’ve noticed with the Xoom and the just-announced Galaxy Tab 10.1 is that many of the Android 3.0 Honeycomb tablets are starting to look the same from a UI perspective. The G Slate (Optimus Pad) does have a major way to stand out from the crowd though: dual cameras that can record in 3D.

The G Slate (Optimus Pad) has a pair of 5-megapixel cameras that can record in full 1080p HD for 2D video. When you’re recording in 3D, you still get an impressive 720p HD resolution. That’s some powerful stuff.

Unfortunately, you can’t watch the 3D content natively on the LG G Slate (Optimus Pad) but you can shoot it over to a 3D television or even the Optimus 3D. It’s a really neat feature but it’s too soon to tell if this is really compelling to users or may be seen as a gimmick.

With the next iPad just around the corner and a slew of Android Honeycomb tablets about to hit the market, the 3D capabilities of the LG G Slate may be enough to make it stand out from the crowd. The industrial design and specs are pretty darn good too, so check out our pictures and a full HD walkthrough video (sorry, it’s only in 2D).