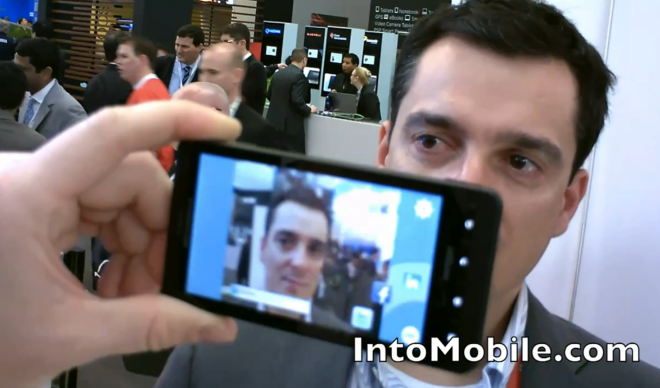 Viewdle is an app that was being shown off at Mobile World Congress 2011 that really caught my eye. Using an augmented reality interface, where you point your camera to the world and your phone screen superimposes data on top of the image, these guys have developed a way for the phone to not only recognize faces without any need for sending data to remote servers, but it also links up to friends on social networks like Facebook and LinkedIn. Right now they have the app running on the Motorola Droid, but on a testing device, they’ve drilled deep into some Texas Instruments hardware to provide idnentifications about 50% faster. The sad part is, Viewdle is aiming this at OEMs, so they can bake social facial recognition right into the OS. A lofty and awesome goal, but it does mean we won’t be seeing this app standalone in the Android Market anytime soon.

Viewdle’s been quietly working on this app for a little over a year, and have recieved funding from the likes of the BlackBerry Partners Fund and Qualcomm. They’re also tight with Texas Instruments, who was featuring them at their booth at Mobile World Congress 2011.  The app could certainly be great for automatically tagging friends in photos as you take them, but what I’m mostly excited about is how this kind of thing actually makes augmented reality useful. As is, it’s used as little more than a gimmick for points of interest browsing, but as soon as object and facial recognition get into the picture, AR gets a lot more compelling. Check out our view of the app in action below.

Personally, I find this stuff awesome, and really hope some forward-thinking cell phone manufacturer jams it into their handsets. For those interested, Viewdle has an SDK available, which you could use to enhance your own app – find out more at their website.

Samsung Wave 578 is the first Bada phone with NFC

Samsung unveiled a new member of its Bada family of devices - Wave 578. At first glance, it looks like...