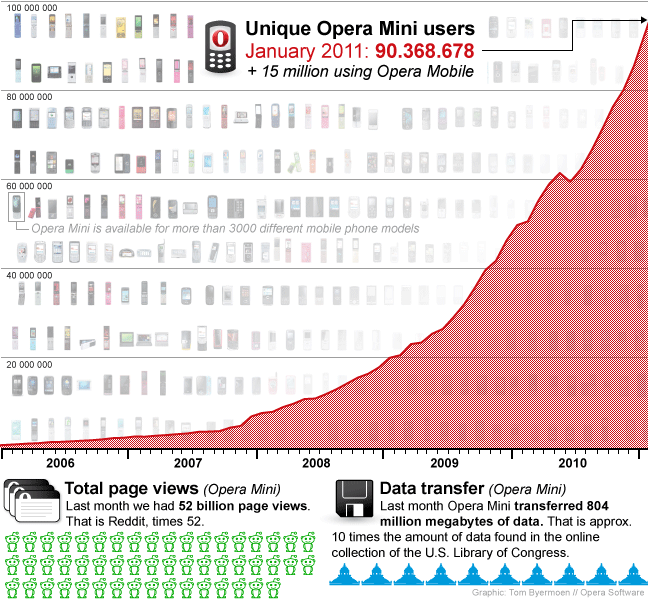 Our Norwegian friends at Opera Software have just announced that they’ve signed an agreement with Qualcomm whereby Qualcomm’s Brew MP operating system will come with Opera Mini installed by default. Brew MP may be something you’ve never heard of, but it’s a highly popular feature phone operating systems used by multiple handset vendors, even HTC, who we all know for their mid and high end Android and Windows Phone devices. Opera Mini, another application you may or may not know about, was built specifically for feature phones. It’s a web browser that leverages servers to handle web rendering and compression in order to improve the end user experience of browsing the web on a low cost device. You type in a URL, Opera gets your request, pulls up the page on one of their thousands of servers, compresses it by up to 90%, and then finally spits it back out to your mobile phone. It’s quite popular. As of last month there were over 90 million people using it on a regular basis. It’s also quite big in America with iPhone users because AT&T’s network is … yea, let’s not go there.

There will come a day when applications/services like Opera Mini will no longer be needed, but we’re a long ways off from that. People in India are only now starting to get 3G connectivity, the same can be said about many South East Asian countries. Then there’s Africa, where operators keeps their networks alive by using generators that run off of diesel fuel. Not to mention people in Africa are paying more per megabyte than you probably do, so the opportunity to explore the world wide web is rather limited to say the least.

Either way, we love Opera Mini, especially when we’re roaming since it cuts down on our phone bills. Damn you operators!

Conde Nast ready to give Android Honeycomb a little love

The Apple iPad has gotten plenty of love in terms of books and periodical publications, and it seemed like Android...