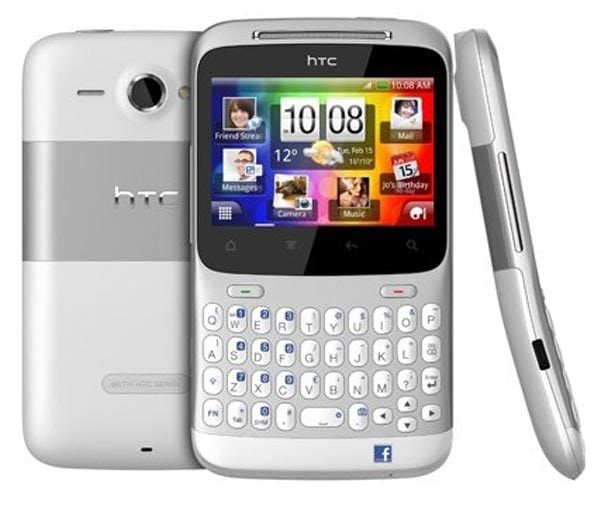 HTC announced its new handset lineup at Mobile World Congress today and, as expected, the Taiwanese manufacturer introduced two Facebook-centric handsets. This pair was spotted in a late-breaking leak that hit the wire Monday and now we have all the nitty-gritty detail on the touchscreen Salsa and the QWERTY-packing ChaCha. Rather than keep you waiting, here is a run-down of the two devices and their specifications:

HTC Salsa: a full-touchscreen handset with a 3.4-inch display and a dedicated Facebook key. The social network is embedded into Sense UI and lets you receive alerts for status updates, birthdays and other important life events. The handset will also display the latest status update and profile picture of a Facebook contact when making or receiving a call. When taking a photo or using Google maps, you can press the Facebook key to automatically upload your photo or share your location with the social network. Not sure what you can share? Then look at the Facebook key as it pulsates when you are doing something that is sharable. The handset and all its Facebook goodness will launch with Android 2.4 and will be available in Q2 2011 at a yet-to-be-determined price.

HTC ChaCha: a front-facing QWERTY handset with a 2.6-inch touchscreen display and a dedicated Facebook button. Similar to the Salsa, the ChaCha will include the same Facebook integration noted above. The handset will launch with Android 2.4 and will be available in Q2 2011 at a yet-to-be-determined price.

While both handsets sport a Facebook button and deep Facebook integration, they will not be branded as a “Facebook phone”, according to Jason Mackenzie, president of HTC North America in Bellevue. Facebook’s mobile chief  Henri Moissinac reiterated this sentiment by saying, “HTC has brought Facebook to these two new devices in an innovative way enabling people to connect and share easily whenever they want, wherever they are.” As was rumored, Facebook and HTC worked together bring these handsets to fruition, but the social network did take part in the building of the handset.

Now that the HTC Facebook phones have been announced, what do you think? Hit or miss?