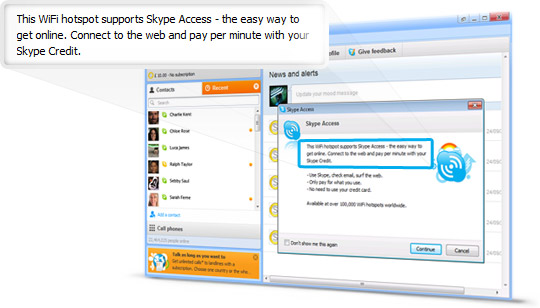 Skype is teaming-up with hotspot operators around the world to offer its users pay-as-you-go Internet access starting at £.04/€.05/$.06 per minute. Dubbed Skype Access, it relies on your existing Skype Credit to charge users, requiring no daily and/or monthly vouchers to get online.

Already the VoIP service provider has a number of partners on board, allowing users to connect at more than half a million hotspot around the world — including 500 airports, 30,000 hotels and numerous cafes, trains, planes, offices buildings and convention centers. In order to connect, you’ll need the latest version of Skype for Mac or PC and enough money on your account to use the service.

Finally to celebrate the launch of the new service and get some media coverage from the press attending the Mobile World Congress, Skype is offering free WiFi access through February 14th across the whole of Spain.

Deutsche Telekom will launch an NFC-based "Mobile Wallet" in 2011, the international carrier confirmed today at Mobile World Congress. The...