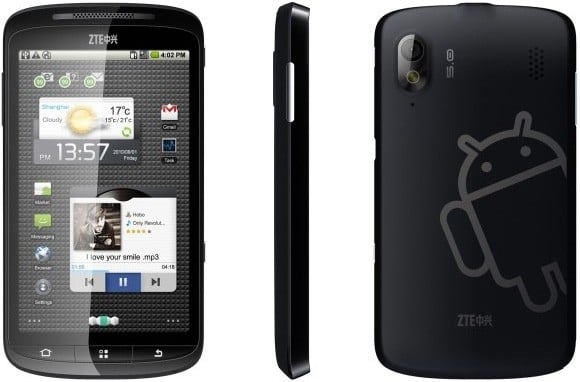 Chinese firms like ZTE and Huawei are breaking into the mobile phone industry in a big way. They’re eating margins from the established players, they make devices for operators and are happy to slap a Verizon logo in place of their own on the back of your next smartphone, and thanks to the likes of Google’s Android operating system and Qualcomm’s integrated Snapdragon platform they can create handsets that compete with the best from the likes of HTC and Samsung. One such piece of the hardware is the ZTE Skate, which was just announced at Mobile World Congress. It features a 5 megapixel camera, 800 MHz processor from Qualcomm, the dated Adreno 200 GPU, and for some odd reason is only triband GSM. There’s 3G too, both the 2100 MHz and 900 Mhz bands. Best thing about this puppy? It runs the latest version of Android, version 2.3, and because ZTE is all about pumping out handsets as fast as they humanly can there are no tweaks done to the OS. At all.

While we’re on the topic of ZTE, the Blade is an Android device that’s not really talked about, but it amazes me just how often I see it in Helsinki. It offers a device comparable to the HTC Nexus One from early last year, but it’s a tad bit slower, and it also has a terrible screen, but for 200 Euros can you really complain? Nokia’s new CEO Stephen Elop talked about this, how the company is getting attacked on three fronts, in the high end from Apple, in the mid range from Android, and from Chinese clone makers at the bottom. In this new world where exactly are they going to add value? Margins that were once in the low 40% to high 30% figures are now just memories of the past. ZTE doesn’t seem to mind this. It’s the others who are suffering.

The HTC Desire S is one of HTC's just-announced higher-end Android phones, slotted directly underneath the Incredible S, and we...