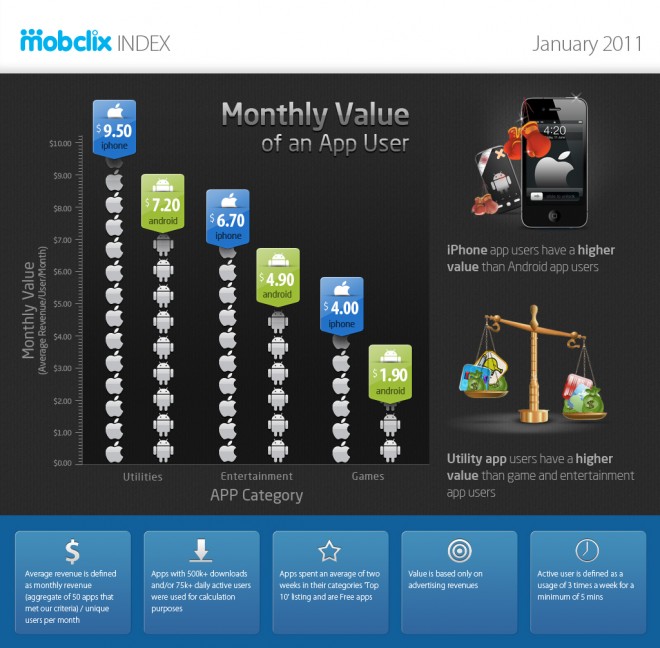 Although Android is everywhere these days, iOS brings in more dough in terms of ad revenue for free apps. It’s tough to say how long this trend will last given Android’s tremendous presence – it’s on hundreds of smartphones and tablets combined – but right now iOS has a pretty solid lead when it comes to raking in ad revenue, especially in the gaming apps department.

According to a Mobclix study, utility app users have a higher value than game and entertainment users. This makes sense, since my own habits constantly revolve around utility apps – like converters, photographic tools, etc. – more often throughout the day than playing games or using entertainment.

Here is the following criteria used by Mobclix to come up with its results:

So we can rule out quick glances at apps or accidental openings and clicks given the minimum 5 minute usage. Also, it’s good to know that the apps included were ones that were actually being downloaded and used.

It’s definitely an eye-opening study when it comes to Android revenue versus iOS revenue for developers, although for seasoned devs, it’s probably not a surprise at all. iOS is where the money is typically made when it comes to paid apps and ad revenue for free apps – who can forget all those overnight success stories that Apple loves to boast about?

Of course, this isn’t great news for Android. According to a post by Counternotions a few months ago, “Like Microsoft, Google doesn’t sell best-of-class user experiences to paying customers. It sells their eyeballs to advertisers. The more eyeballs, the better. The most, the best.”

It’s early in the year and Android is still growing at an alarming rate, so it would be interesting to revisit these numbers later this year.

Even the best of us get things wrong every once in a while and that's why you may have seen...