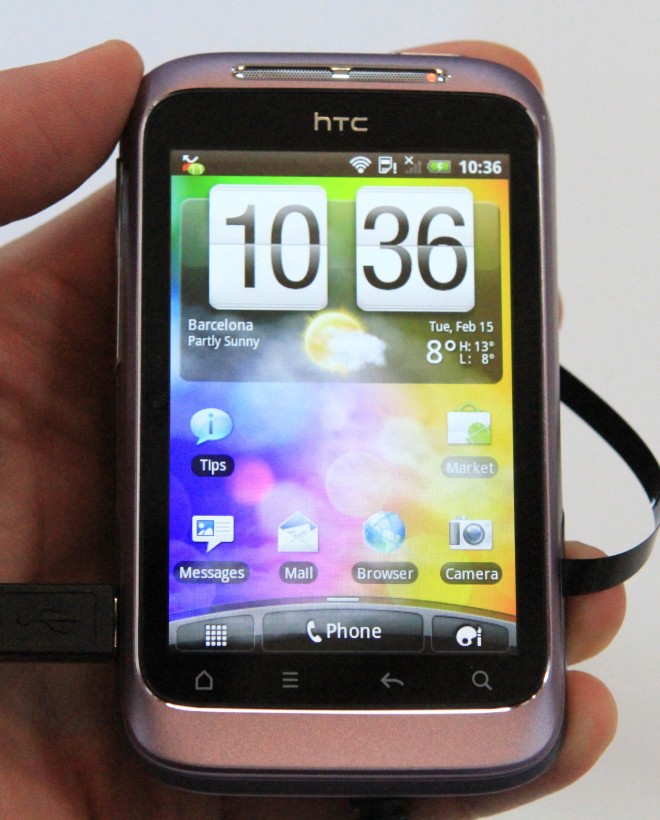 One of HTC’s newly-announced Android smartphones is the Wildfire S, the successor to the compact and feature-packed Wildfire from last year. The iterative update to the Wildfire made its debut at Mobile World Congress 2011 at HTC’s press conference, and we had a chance to take the compact handset for a spin. If you’re in the market for a smartphone that you can hide in the palm of your hand, but still want the latest and greatest features, the Wildfire S might be something to consider.

The device isn’t exactly something we’d call a performance junkie. It sports a 600MHz processor at a time when dual-core smartphones are hitting market and quad-core processors are just starting to rear their heads. The touchscreen display, while still doubly as good as its predecessor, falls far short of the WVGA displays that are so popular today. Still, considering the Wildfire S has a 5-megapixel camera, GPS, WiFi (B/G/N), Bluetooth 3.0, and a 3G data connection, the handset can hold its own against other mid-range smartphones on market today.

To be sure, the phone is tiny. It’s almost comically small in my man-sized hands. HTC isn’t aiming this handset at manly men, but we won’t blame any of you full-grown dudes out there that pick up this bite-sized Android phone as your primary handset. Well, maybe we’ll blame you just a little.

You can expect the Wildfire S to be broadly available to customers across major European and Asian markets during Q2 2011.