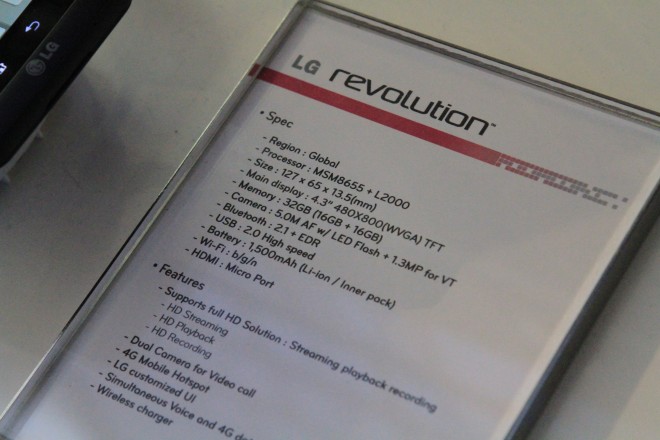 Even the best of us get things wrong every once in a while and that’s why you may have seen Engadget reporting that the upcoming Verizon LG Revolution dumped the NVIDIA Tegra 2 chipset in favor of the Qualcomm 1 GHz SnapDragon MSM8655. Well, LG didn’t, as the Revolution always had the Qualcomm chip – we know because we asked.

The report is based off this NVIDIA YouTube video which has a representative talking about how the LG Revolution is powered by NVIDIA and at Mobile World Congress, the LG booth clearly says the SnapDragon MSM8655 is powering it. Well, the video was a guest blogger who just happened to goof – NVIDIA told us so.

Many of the other devices announced during the Verizon 4G LTE event did rock the Tegra 2 (the Droid Bionic, for example) and NVIDIA confirmed to us that the LG Revolution definitely never had it. The posting of video was an oversight.

The dumping of Tegra 2 in the LG Revolution in the four weeks between CES and Mobile World Congress 2011 just never passed the smell test. These type of devices take up to 18 months to design and build, it’s far too difficult to just swap out parts this late in the game. Sure, you may be able to swap out some other elements late in the game but it just simply doesn’t make sense to replace the processor in such a short period of time.

Don’t feel too bad for NVIDIA, as the Tegra lineup will be in a ton of devices over the next few months. We can look forward to the Motorola Xoom, LG Revolution and many, many more later this year. In fact, the next Tegra chip will be a quad-core monster that should be in an Android tablet by August.

So this rumor has officially been debunked. You’re welcome, friends.

[Update]
Engadget has confirmed the rumor debunked on their end as well.

Sure, two-way video chat on mobile devices is cool, but what if you could hold a video conference call with...