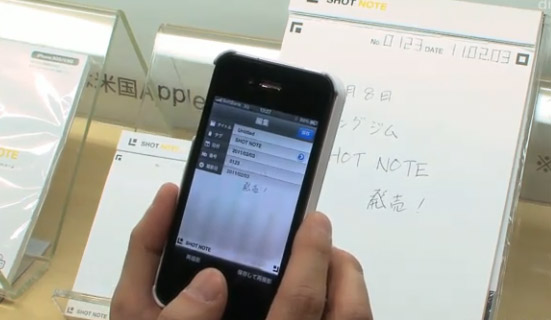 Japanese company King Jim is offering a somewhat strange product for iPhone owners. We’re talking about printed notepads, which are specifically made for iPhone users allowing them to easily digitize, store and organize handwritten text.

The concept called “Shot Note” requires that an iPhone user starts the same-named iPhone app, take pictures of their notes and let the app do its magic relying on OCR markers printed on the paper. Once scanned, the text can then be organized in a number of ways and also be sent to Evernote, which is steadily gaining traction in the Land of the rising Sun not least thanks to that Evernote-preload deal with NTT DoCoMo.

King Jim’s notepads are available in four different sizes, ranging from $4 to $16. Kinda pricey, but then again seems useful too. And you’re about to see just how useful Shot Note can be from a short video below (shot by Diginfonews in Tokyo). Enjoy!

Windows Phone 7 Connector is in the Mac App Store

It is highly unlikely to have a Mac user owning a Windows Phone 7 device. Let's say that happens, how...