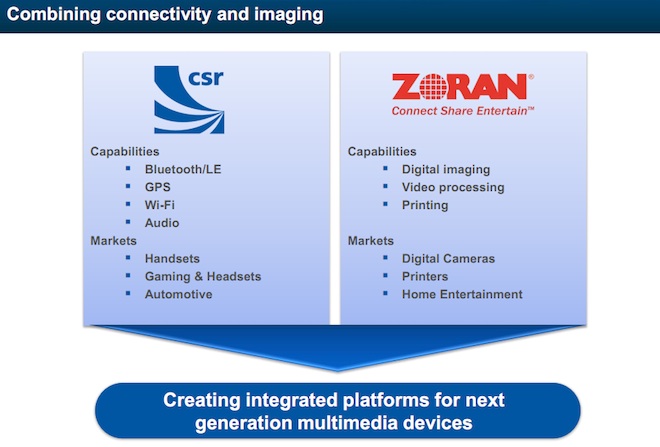 Zoran and CSR, two companies that are not really household names, but nonetheless make important components that find themselves inside many of the consumer electronics devices you’ve either already purchased or are considering buying, have agreed to merge in a deal slated to be worth roughly $679 million. Zoran shareholders will receive 1.85 ordinary shares of CSR for each share of Zoran stock and CSR is planning on returning up to $240 million to shareholders via a share buyback program. CSR makes chips that give devices GPS, Bluetooth, FM, WiFi and Bluetooth connectivity, while Zoran makes processors that typically go inside televisions, cameras, and set-top boxes.

Once the merger is complete you can count on the combined entity, which will retain the CSR name, to offer single chip solutions that do intense image and video processing while also providing general connectivity. How long until you’ll see such a platform inside your next mobile phone? That’s hard to tell since other vendors such as Qualcomm, Texas Instruments, and ST-Ericsson already offer solutions that not only combine video encoding/decoding and an application processor from ARM, but also cellular connectivity.

Joining forces make a lot of sense these days since battling the bigger players will increasingly become difficult. The market for connected devices is only now just starting to open up. Don’t believe me? Just take a trip to your local electronics store and try to find a television set or Blue-ray player that doesn’t come with built in WiFi and enough horsepower to let you stream Netflix movies and YouTube videos. Also the next phase of consumer innovation will come from cameras, not just to snap photos, but to recognize gestures. The popularity of Microsoft’s Kinect for XBOX gives us a glimpse at where we’re heading.

At the end of the day, it’s the guys at ARM who are happiest since they’ll end up in nearly everything that runs off electricity.