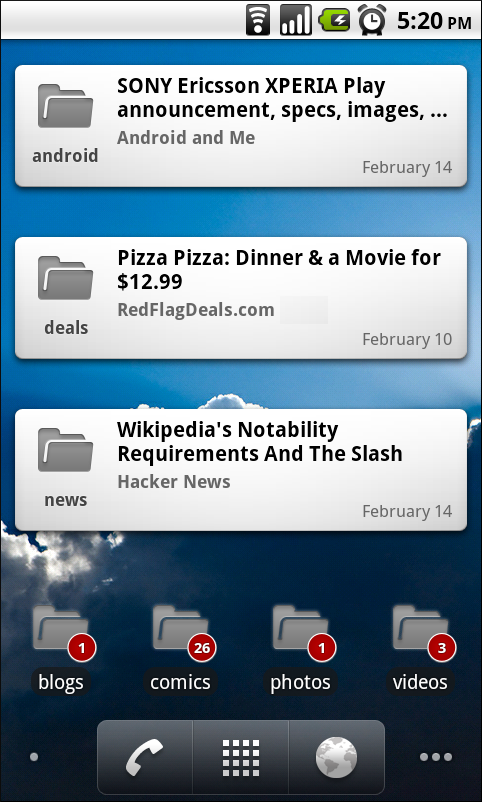 Dab smack in the middle of Mobile World Congress last week, Google released an update to their relatively new Reader application for Android. There’s now an unread count widget, so you can see how much catching up you have left to do (though I’ve personally given up on keeping any stream down to zero). There’s also a ticker widget so news can lazily drift through your home screen. Finally, there’s a new option to “mark previously as read”, which clears anything above your current view from the to-read list.

Google Reader is the de facto standard for combing through RSS feeds, or “Really Simple Syndication”. This enables you to monitor multiple websites for new content at once, with the convenience having it all come to you as it’s available, rather than you having to go out to individual sites and check. For news hounds, RSS is an invaluable tool, and for more casual users, it can be a nice way to keep tabs on webcomics or podcasts.

The Android app first came out a few months ago with excellent support for multiple accounts, folders, and article sharing. I live and die in Google Reader for the desktop, and though I haven’t had too much time with the Android version, I trust it would be a regular destination as well. On BlackBerry, I’m usually glued to BerryReader, which is a really well done third-party solution, but I’d pay in blood for an official app. Yeah, there’s the mobile site, but c’mon Google, you’re not fooling anyone – a real app is always better than a web app.

If you’re packing an Android phone, you can find the new and improved Google Reader in the Market.

Samsung and Sprint pull Android 2.2 update for the Epic 4G

Bad news for Sprint Epic 4G owners clamoring for an official taste of Froyo. According to folks at Android Central,...