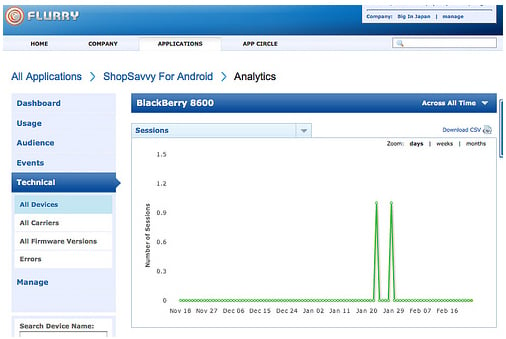 ShopSavvy, a price comparison app, has detected that their Android app has been used in Waterloo, Ontario (presumably by someone at RIM) on a BlackBerry Curve 8520, Curve 8300, and a mystery 8600 device. We had heard plenty of rumours that the BlackBerry PlayBook will be able to handle Android apps, but this is the first we’ve heard of RIM’s smartphones pulling it off. It stands to reason that handsets might inherit the ability once the QNX-based operating system of the tablet finds its way to phones, but the fact the apps are running on older hardware suggests the feature may be somehow backwards compatible.

Take this info with a grain of salt, as there’s no telling how or why these detections were made. Maybe the apps aren’t running on the older 8300 and 8520 at all, but the phones are just identifying themselves that way and are in fact some other pre-production device. Maybe some clever programmer managed to figure out a way for an Android to be ID’d as a BlackBerry as far as apps are concerned. Or maybe RIM actually is working on a way to put Android apps on old and upcoming smartphones. What do you think?