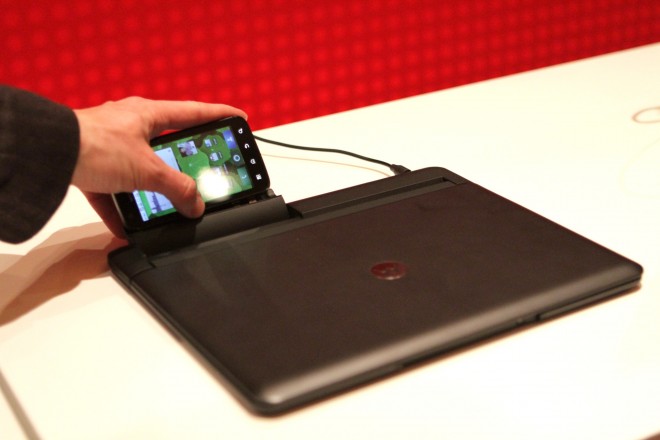 Motorola doesn’t seem satisfied with its hot new 10-inch Xoom Android tablet, or its Atrix 4G – a smartphone that allows users to dock it to a laptop-style device with its Webtop app. The manufacturer is now working on a more portable 7-inch tablet and plenty more smartphones that will connect with its laptop dock.

However, it looks like Motorola is really looking to diversify its tablet offerings with several other sizes, according to PC Mag:

It’d be interesting to see which screen resolutions stick with these different sized tablets – several different resolutions can be a real pain for app developers – because most new devices are leaning toward high-resolution displays.

Additionally, Motorola says its high-end smartphone line-up will all become Webtop app capable (i.e. they will all power laptops much like the Atrix 4G). Starting June 2011, every “high-tier performance phone” will have Webtop capabilities according to Motorola CEO Sanjay Jha.

While this is all very interesting, how many of you would be interested in a laptop-capable phone like the Motorola Atrix 4G? The phone can be accessed through the laptop and can even make or take calls, and it powers a full browser on the device, too. Meanwhile, the laptop itself is like a giant battery which will charge the Atrix while it’s plugged in.

But how many of us who own laptops and smartphones have the desire for something like that? The same can probably be said about the iPad, though I’d hardly compare the two. Your phone does everything you’d want or expect a smartphone to do: it makes calls, sends and receives e-mail and you can check your social networks, too. With your laptop, you can work, process videos and images, do more intensive web-browsing and run powerful applications. Is another ‘tweener something the world needs right now?

We’ll find out just how the market feels about these new devices later this year.

REVIEW: Android 3.0 Honeycomb – Does it hit all the sweet spots?

It's finally here, folks. The Motorola Xoom has officially been launched and we've got some time to put Honeycomb through...