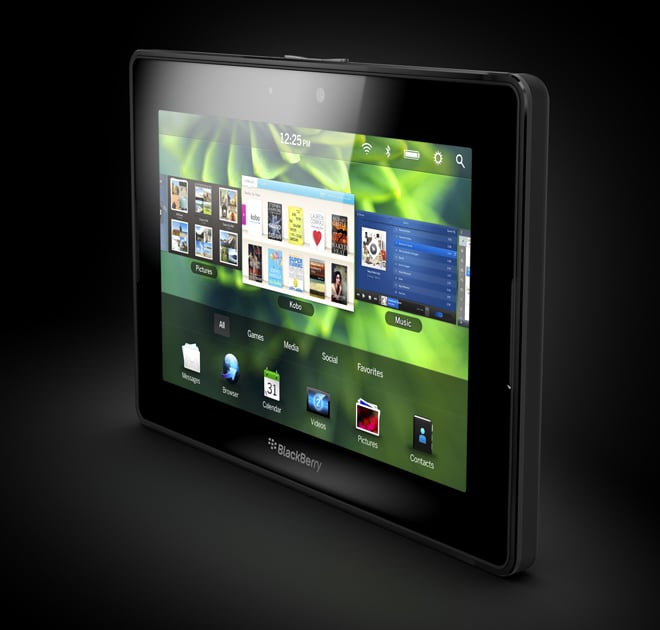 RIM has been promising to get the BlackBerry PlayBook tablet out into our hands by the end of Q1, which is the end of the month, but rumours are suggesting it won’t be in stores until April 10th. The final version of the QNX-based operating system is expected to be ready on March 31 though, which should give developers enough time to make sure their apps all work smoothly.

Despite mounting competition, the BlackBerry PlayBook still holds its own: it’s powered by a dual-core 1 GHz processor, 1 GB of RAM, and an OS that handles multitasking like a champ. The screen is a portable 7 inches, and HD-ready with a 1024 x 600 resolution. Speaking of which, both cameras (5 megapixel on the back, 3 megapixel on the front) can record in HD, which is great for video calling. Wi-Fi and GPS are both included, with 3G accessible through Bluetooth tethering and a future hardware upgrade available for WiMAX, HSPA+ and LTE versions. A feature called Bridge will let you access e-mail, calendar, contacts and other PIM through a BlackBerry smartphone, but it’s still unclear if RIM will offer those essential features standalone at launch

The timing of this leak is awfully convenient given Apple is announcing their new tablet today, and it wouldn’t be surprising to see the iPad 2 for sale within the next few weeks to meet RIM head-on.  RIM has been showing off the PlayBook since September, and folks are getting impatient with the lengthy pre-launch period. On the one hand, it has given RIM some time to build up hype and explain new features as they’re developed, but in the same time competitors have been releasing products. A lot is hinging on the PlayBook’s success, not only as RIM’s first tablet, but as setting the tone for the OS which will eventually find its way into their smartphone lineup. Until that transition to smartphones is made, the BlackBerry handsets coming down the pipe look decent and iterative at best, and only really stand a chance of holding our attention if they’re announced with the promise of a QNX OS upgrade.

In any case, tentatively pencil in the PlayBook launch for April 10, if you’re thinking of getting one, and be prepared to change your mind after seeing the iPad 2 this afternoon.

We're just a few short hours away from the iPad 2 event in San Francisco, and it looks like Amazon...