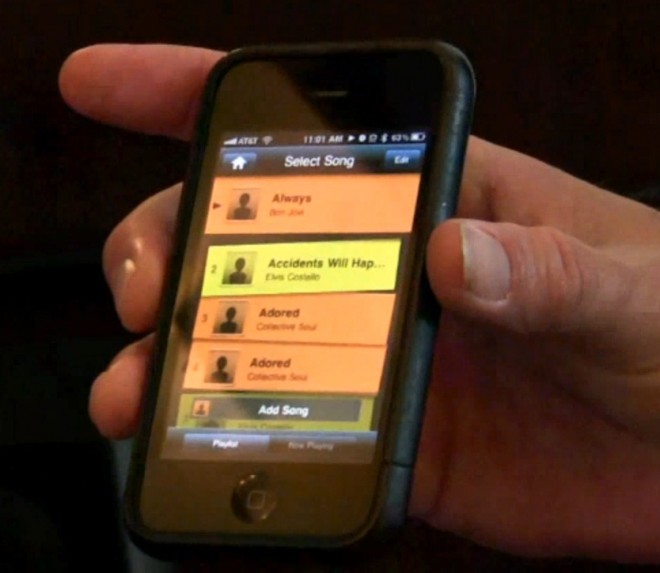 While at a press event in San Francisco this morning, we were able to get our hands on the Pioneer Air Jam iOS app. This free program enables iPod touch, iPhone and iPad owners to create group playlists that stream to a Pioneer receiver.

The Pioneer Air Jam iOS app connects devices to a receiver via Bluetooth and then the users get to pick playlists. Each individual users can add music tracks from their device to the group playlist and each selection is placed in sequential order.

A little fun thing is that if you don’t like the track playing, you can switch it to something else using your iDevice. The Pioneer Air Jam iOS app is also smart enough to know that when an iDevice leaves the connection, their tracks will be removed from the list.

The Pioneer Air Jam iOS app will also let you look up songs on YouTube and stream those to the receiver. Of course, you can’t stream the video itself unless you’re physically connected to the receiver but I can still find this useful because YouTube generally has a lot of live performances that still sound pretty good.

The Pioneer Air Jam iOS app is just the latest attempt by the company to appeal to Apple users. At the event this morning, it made it clear that it is going after these customers and that it will be the most “Apple friendly” among its competitors.

The company said that the “Apple passionate” consumers are a different and lucrative breed. In fact, ever since Pioneer went after this market hard a few years ago, the company has seen its share in the receiver market almost double in about three years.

Check out the video below and we’ll have some more about the intersection of mobile technology and home stereo equipment.

The Apple iPhone is just about perfect in every way, but its notification system is its Achilles' Heel. Regardless of...