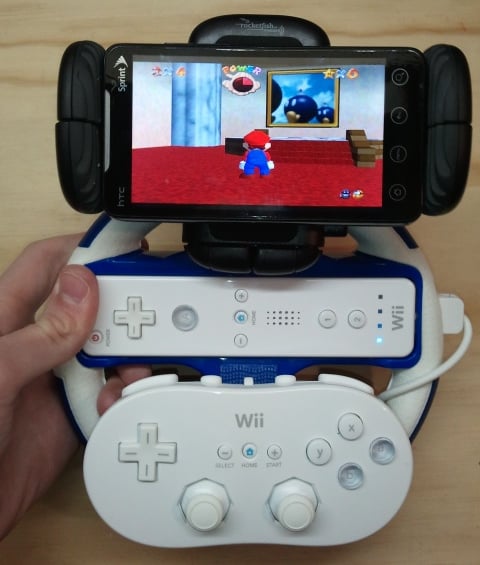 Let’s say you picked up that Nintendo 64 emulator for Android last week. And let’s say you have a Wii remote and a classic controller kicking around, but for some reason no Wii system through which you could download Virtual Console N64 titles. Further, let’s say you have a grave distaste for on-screen controls, as they sully the visual purity of the game. Finally, let’s assume you have immersed yourself so deeply into gamer culture that you have long abandoned any commonly-held social graces for the sake of maintaining or improving credibility among your equally geeky peers. My friend, the EVO-Tainment DIY kit is for you.

For a mere $10, you get a Wii steering wheel accessory usually used for games like Mario Kart with a smartphone car mount attached that should work with any handset with screens up to 4.3 inches in size. Slap in your Wii Remote, hook up a classic controller (that can stick on either the front or back), pair it up via Bluetooth to your phone, and you are ready to rock retro games like no other. I doubt I could bring myself to whip something like that out on a bus, but you gotta admire the ingenuity that goes into imaging such an accessory.

The maker of this little gem, WFB Gadgets, is aiming to make a plastic-moulded product with similar functionality. I’m not sure it will have as wide appeal as the GameGripper, which has expanded to the HTC G2, Samsung Epic, Samsung Moment, Motorola Backflip, Devour, and Nokia N900 since launching on the original Droid. Still, there’s something to be said about the novelty of pairing up your phone with official Nintendo products (especially when they’re so snarky about mobile gaming).

If this is the sort of thing you could see yourself enjoying, you can pick up the EVO-Tainment DIY kit over here. Here’s a video showing the thing in action. Yep, it actually works.