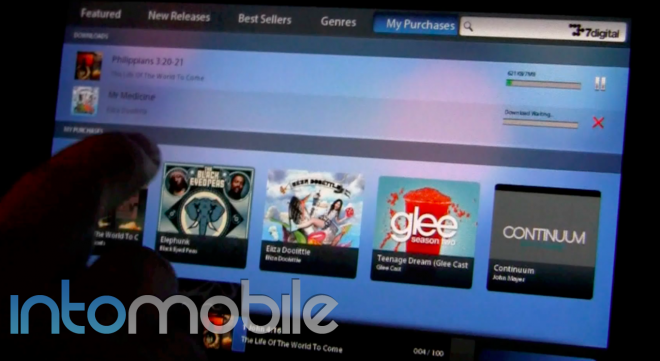 We’ve been looking at the BlackBerry PlayBook for a long, long time now and we thought it would be tough for Research In Motion to show us something new with its tablet but the company did reveal to IntoMobile exclusively how the song purchasing and how BlackBerry Podcasts will work on a live unit.

At SXSW 2011 in Austin, RIM showed us how the PlayBook will operate on the multimedia side and it will be partnering with 7digital to provide its music content. These songs will come without DRM and you’ll be able to use BlackBerry Media sync to get your existing music library on your tablet.

The PlayBook music store will link into the 7digital backend and you’ll be able to pump in your credit card info for some one-click purchases. The collection includes more than 13 millions songs including the wonderful Mountain Goats. You’ll be able to preview the songs before you buy it and previously-purchased content will be ready to rock and roll.

We’ve seen video of this before but this is the first time we see it on a real-life BlackBerry PlayBook. We also get a good look at the BlackBerry Podcasts integration, which brings audio and video podcasts to your fingertips in a simple way.

Of course friends, the real question is: When is this thing going to hit the market? It’s been almost six months since the BlackBerry PlayBook was first introduced and the competitive landscape has changed dramatically. We’re looking at a world with the iPad 2, Xoom Android Honeycomb tablet and the HP TouchPad vying for consumers’ attention, so RIM definitely needs to hit the “Q1” deadline it has been promising in order to make a mark with consumers.

The company assures us that it will be “sooner than you think” and if you watch the video below, you’ll want to believe it.

iFixit  got its hands on an iPad 2 and promptly tore the tablet down to its screws and rails. Most...