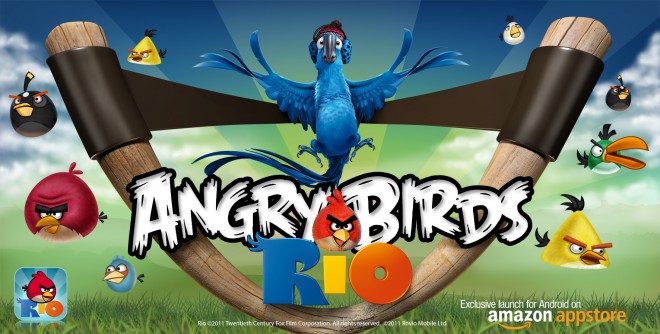 The Angry Birds phenomenon rages on with a new version of the game available for Android exclusively through the Amazon App Store. It’s a bit unusual for the game to be sold exclusively through a distributor not known for its popularity for mobile apps, so one has to wonder about the deal that Amazon and Rovio brewed up.

Angry Birds RIO, in conjunction with Twentieth Century Fox, will be available from the Amazon app store and features birds from the animated movie RIO.

To date, over 30 million copies of the popular birds-versus-swine game have been sold for the Android platform. While Angry Birds has been on the market for over a year now, it shows no signs of slowing in terms of downloads and growth across all available platforms.

For more details on Angry Birds RIO, see the press release on the following page, or see this link to download the game for your Android handset.

Are you ready for NCAA March Madness? The 2011 Division I Men's Basketball Tournament is all setup and ready to...