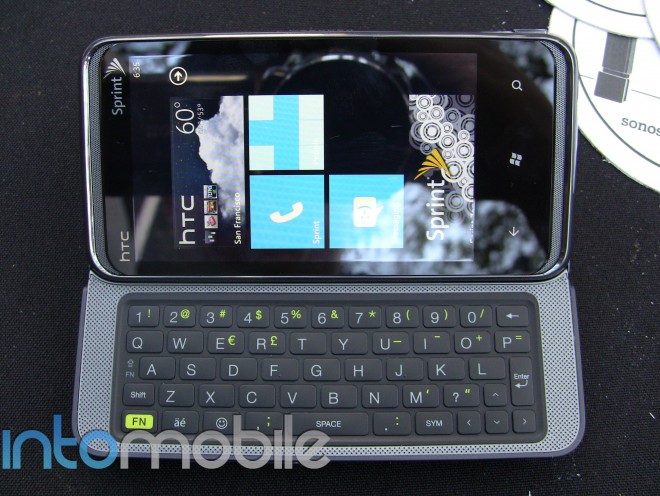 The HTC Arrive was announced not-too-long ago but this is the first time that you’ll see the Windows Phone 7 smartphone not being tethered to a stand. Yeah, that’s just kind of how IntoMobile rolls.

The HTC Arrive is a Windows Phone 7 device that will debut on Sprint soon and it will be the first U.S. device that rocks the latest Microsoft smartphone operating system on a CDMA network. It comes on a CDMA network because this device features the NoDo update, which includes the copy and paste feature and support for CDMA networks, like Sprint.

I’m not quite sure how I feel about the HTC Arrive, as the big, roomy keyboard with a full number key is quite easy to type on and it’s remarkably light for having a full, horizontal-sliding keyboard. It’s still going to be bigger and heavier than a full touch device like the LG Optimus Black but it’s a good size for a full tilt-out device.

Speaking of the tilt-out feature, the screen on the HTC Arrive does slide out and then tilt up, much like the old Tilt phones of yore. It’s a nice, spring-loaded feeling but I’m not quite sure it’s excellent for you hardware fanatics because it can lead to a gross gap between the keyboard segment and the screen segment if you’re silly like me and try to push it up on the opposite side. Yes, that probably won’t be a major issue in day-to-day usage but you never know what happens when the handset is in your pocket or bag.

The keyboard on the HTC Arrive with Windows Phone 7 feels nice and it is quite roomy. The typer in me loves the full dedicated number row and the buttons have a solid amount of feedback and tactility.

The HTC Arrive is powered by Windows Phone 7 and you know what we think about the platform. This will also include the company’s specified hub, which includes fancy weather updates and more.

Damn. SXSW 2011 has been a bonanza for the IntoMobile team on the BlackBerry PlayBook exclusive side, as we just...