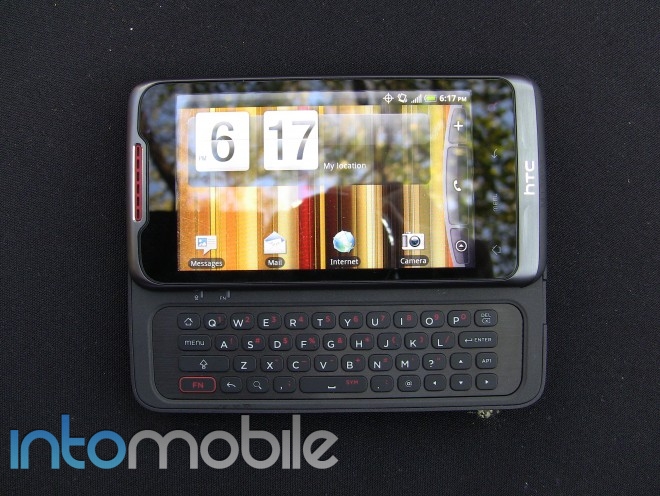 We’ve had our eye on the HTC Merge for some time but now we’re finally getting some hands-on love from the sexy Sense device. This dual-mode handset should be making its way to multiple carriers this year.

The Merge is basically a Desire Z with a different hardware design, which looks to match up with Verizon’s Droid lineup. With no official announcement, we’re still not sure if we’ll ever see this thing hit Big Red, but it may be a good thing. The Merge would have been a good filler device to Verizon’s lineup – a good alternative to the Droid 2 – and a nice option if you had eyes for the Incredible but wanted a keyboard. The Merge on other CDMA carriers like U.S. Cellular would be a different story.

Shipping with the 800MHz Qualcomm MSM7X30, the same as the T-Mobile G2, we already know that the handset will be quite snappy. You’ll also find a 3.7 inch display, 5-megapixel shooter with a single LED flash and, of course, the full QWERTY keyboard. We wish we could say we loved the keyboard but it wouldn’t be completely truthful. It may have been the lack of time with it and could very well prove to be quite usable over time, but for now, we think there’s a bit to be desired with the keyboard and HTC could start by canning the directional buttons on the bottom right of it.

Since it’s taken the Merge so long to make it out of the gate, we wouldn’t be surprised if it sold in the $100-$150 price range, especially with high end devices like the Thunderbolt and Droid Bionic looming. Nonetheless, the Merge feels solid in the hand and even though it’s on the masculine side when it comes to design, we know some ladies out there will dig the handset. HTC is known for their solid phones, and the Merge is no exception.

If the Merge does make it to Big Red’s shelves, it’ll be touted as a world phone, thanks to it’s dual-mode innards. If you hop around the world a lot, you’ll find the Merge to be helpful since it has a SIM card slot onboard, but it won’t be able to easily switch to AT&;T or T-Mobile. Whether or not we’ll see a standard GSM variant someday is anyone’s guess but we wouldn’t complain if we saw one.

We like this handset but with so much competition around, the Merge needs to hit the ground running to catch up with the rest of the crowd. We hate to say it but when you’re comparing some of the handsets that are about to pop up, the Merge could be considered too little, too late. However, it could fit right in the crowd depending on what carriers it lands on and attract many people if priced correctly.

Check out the video and gallery below!

One of the many great features on the HTC EVO 4G is that is has an HDMI port on it....