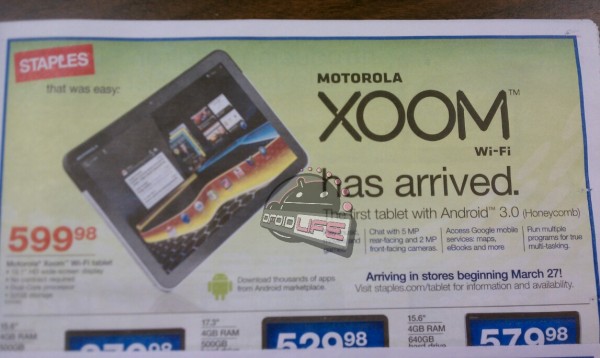 The WiFi version of the Motorola Xoom may land at Staples on March 27th with a $599 price tag. This salient pricing and availability information was spotted in a leaked sales flyer. The flyer prominently displays the Motorola Xoom WiFi and exclaims that it has arrived. Because this is an early and unintended leak, the URL listed in the advertisement does not contain any information about the tablet and only resolves back to Staples main website. The launch of the tablet at a retailer like Staples is interesting as Staples is not usually considered a high technology outlet and source of leading technology. Best Buy is the default big box electronics retailer in the U.S., but Motorola may be looking at alternative retailers where the iPad 2 and other tablets are not so prominently displayed.

The potential $599 price tag may be welcome information for folks looking for a less expensive tablet offering. The Xoom launched with integrated 3G functionality and a rather high price tag of $799. Sales figures have not been released but the $800 pricing places the Xoom out of the reach of the average consumer. Android fans and tablet aficionados may not balk at such a price tag, but the average joe walking on the street may not be willing to shell out eight benjamins for a niche product. The discounted $600 price tag of the WiFi model is still a bit high for the general consumer with little knowledge of tablets. Its pricing won’t convince him to buy the device, but it is competitive with the similar iPad 2 model. Someone with an Android handset and extra cash to burn has little reason not to buy the Xoom if they are in the market for a tablet device.

If the specs and price are not enticing enough, then you may find the leaked version of Flash 10.2 for the Android tablet a bit more interesting. The unfinished Flash plugin is compatible with Android 2.2, 2.3 and 3.0 devices. On the Xoom, it improves Flash performance and gives the tablet in-browser Flash support. For those that prefer to bypass a beta version, the full version is expected to land later this week.

Still on the fence about the Xoom? Then check out our hands-on review of Motorola’s first Android Honeycomb tablet device. We will also have a video of Flash performance on the Motorola Xoom soon.

Ladies and gentlemen it's my pleasure to announce that the longtime rumored white iPhone will finally be available "this spring."...