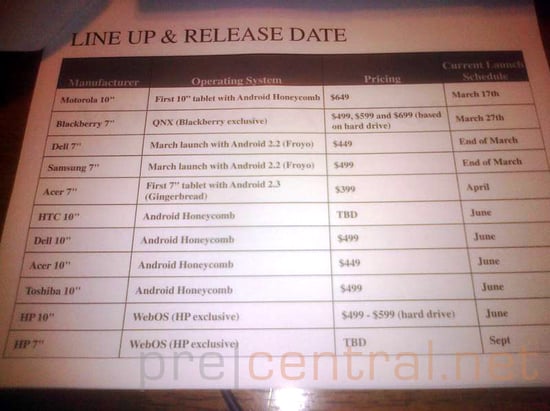 The launch dates and prices for a bunch of tablets at an anonymous major U.S. retailer have snuck out. First up is the Motorola Xoom (likely the Wi-Fi-only model), supposedly launching on March 17 for $649, though we’ve heard 27th. and $599 elsewhere. Then there’s the BlackBerry PlayBook due for March 27 (not April 10) and costing $499, $599, and $699, as expected. For the end of March, we can expect a 7-inch Samsung tablet for $499, and with any luck it’ll be whatever we see announced at CTIA. For some reason, the Dell Streak 7 is listed at the same date and price point, even though it launched back in February on T-Mobile. Acer will have their Android 2.3 tablet roll in at the end of April for $399. June will be the busy month, with the HTC Flyer , a 10-inch Dell tablet (Gallo?) for $499, the Acer Aconia Tab A500 for $449, and Toshiba Folio 100 all planned for a release. HP’s TouchPad and a 7-inch variant are listed for June and September launches respectively, with the prior costing between $499 and $599, depending on how much storage you want.

That’s a hefty number of tablets to look forward to, but remember that the particulars of this info is still in the realm of rumours for now; release dates can be pushed back, or sources stale. June promises to be a busy month, and should give retailers enough time to have a full selection of tablets available for the 2011 back-to-school season.

Verizon confirms the HTC Thunderbolt for March 17th at $249.99

Verizon Wireless confirmed the HTC Thunderbolt will arrive on March 17th. The Android LTE handset will debut for $249 with...