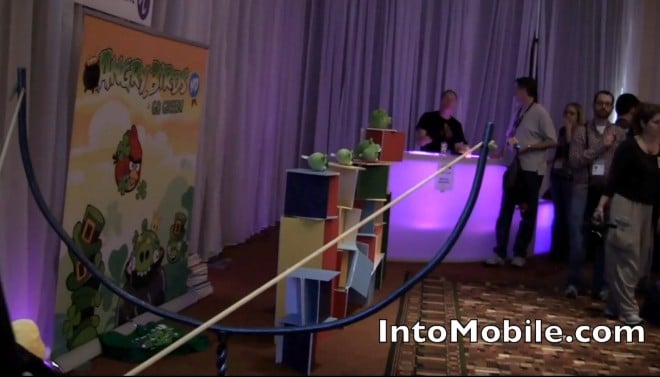 By now, I’m sure most of you have either played or heard about Angry Birds but I’m guessing you may not have seen it being played in real life. Well, that’s exactly what the video below will show you, as Rovio set up a live-action game at SXSW 2011.

The live-action Angry Birds was accomplished with a giant slingshot, cardboard fortresses and those wonderful plush dolls. Unfortunately, the bomb bird wouldn’t actually explode, so no one was truly able to kill all those dirty pigs.

While watching the live-action Angry Birds game, I was able to speak with Rovio executives and get the skinny on what we can expect from the franchise over the next few weeks and months. The next version of Seasons will be based on Saint Patrick’s Day, so look for a lot of green in the game.

On March 22, we’ll see a version of the game that has a tie-in with the Rio movie. This is a major motion picture about birds that have been kidnapped, so putting the Angry Birds characters in this is a natural fit.

Even the live-action Angry Birds game shows you how intelligently Rovio has evolved the franchise from just being a one-hit wonder. Those plushies are just one of many physical products we should be seeing with this franchise, as books, movies and other things should be in the stores soon.

The company has just raised a whopping $42 million and it will be using some of that cash to bolster the Angry Birds franchise. The company believes that this could be its Mario – Nintendo is still able to cash in on that character 25 years later.

In the future, don’t be surprised if you see carrier-loaded versions of the game and the company will continue to experiment with in-game advertisements and purchases like the Mighty Eagle.

Your car's license probably isn't associated with much beyond getting you tickets but Bump.com is trying to change that by...