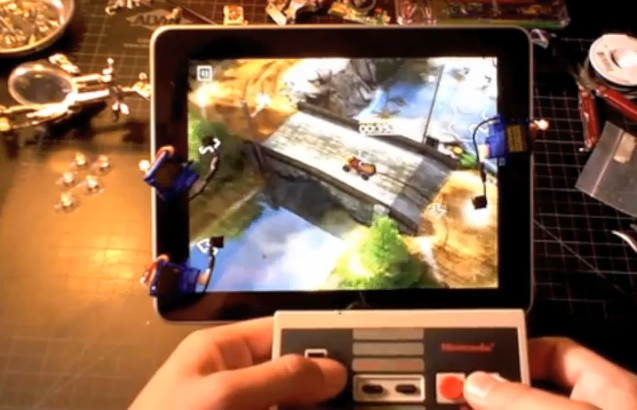 We’ve seen a number of accessories for both the iPhone and iPad that allow you to play games on the device without using on-screen controls that end up taking valuable real estate, but what if you want to play your games with some robotic drones inputting the commands for you while you order them from the comfort of your couch on your NES controller? Then you might be the evil genius known as ProtoDojo.

In the video that you’ll see below, ProtoDojo came up with the idea when he wanted to play Reckless Racing HD while using his NES controller. I don’t blame him as the game reminds me of the NES classic “R.C. Pro Am”, so playing it with an NES controller would be an ideal way to play. So ProtoDojo hacked an old NES controller he had laying around to control micro servos with custom conductive arms which, when triggered, would touch the iPad, thus issuing an on-screen command.

This is certainly a cool workaround ProtoDojo figured out instead of jailbreaking his iPad in order to use a bluetooth controller such as the Wii remote, but having all of those micro servos clinging all over his iPad seem to take my more real estate than it would just playing the game with your fingers.

So the new iPad 2 was launched and you were one of the first in line to grab one. You...