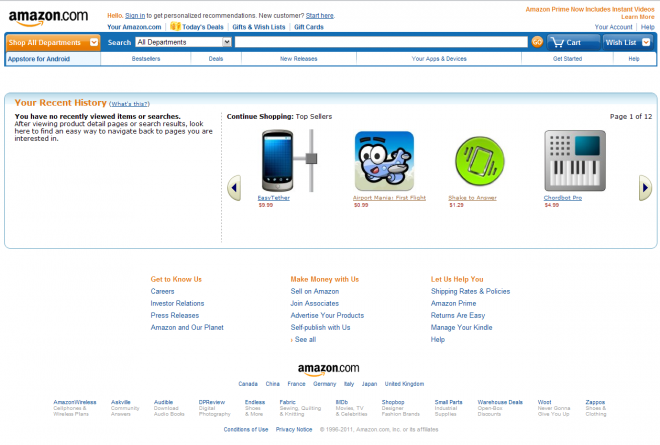 Amazon’s Android app store looks to be chugging along quite well, and went live for a short time today, only to be pulled immediately. That didn’t stop AndroidNews.de from grabbing a couple of screenshots, which show some exclusive titles, and some existing applications that undercut the Android Market’s official prices.

Not everyone was in love with the fact that another major Android application store would emerge from Amazon, but now it’s starting to look like a great idea. Amazon means business, and by offering up cheaper, and exclusive applications, it could push many users to begin using the third-party app store over the official Android Market. It remains to be seen if the new entrant will have some of the great features that come with the official marketplace, like sending and installing an application directly to your handset, but time will tell.

To further its reach, once this store goes live, an official application for the store itself could appear in the Android Market. It may lack the integrated carrier billing feature that some handsets support, but buying an app through your Amazon account will likely be a pain-free experience.

AndroidNews.de compiled a chart of 30 applications found on the Amazon app store and compared them to the prices of the Android Market. Of the 30 applications, 14 were cheaper if you bought them through Amazon, and only three were cheaper on the Market. Not only that, but Amazon offered up four exclusive titles, like Call of Duty: Modern Warfare: Force Recon, 3D Spider Walk, Brainwave Tuner, and Highborn. We also know that Angry Birds Rio will make its debut on Amazon’s store as well, and that alone will get some people to take notice.

While it could be somewhat irritating to some users that they will need to download an extra application store to get certain titles, in the end it’s a good thing for them. The competition may force Google to encourage developers to make the price of applications cheaper, and give another outlet for developers to get their application noticed.

Either way, the user wins with this newfound competition, so who’s looking forward to it?

It looks like BlackBerry Traffic isn't the only thing RIM is updating today. Facebook for BlackBerry has just gone into...