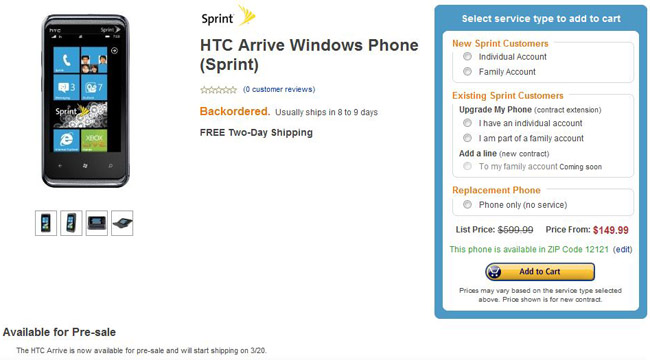 After the Thunderbolt, another HTC device is getting the “pre-order treatment” on Amazon. It’s the HTC Arrive, which as you probably know is Sprint’s (CDMA-based) version of HTC 7 Pro.

The Windows Phone 7-enabled device officially goes on sale March 20th with a $199.99 price tag. Amazon is once again making for a sweater deal, offering the same product for $50 less. The shipping date remains the same, meaning you won’t be able to get your hands on the Arrive before Monday.

The HTC Arrive (and HTC 7 Pro for that matter) is a business-centric device that rocks both a touchscreen and a QWERTY keyboard. Rest of the specs includes a 5-megapixel camera, WiFi connectivity, 1GHz processor, GPS, Bluetooth and tons of on-board storage.

You can pre-order the HTC Arrive from this page on Amazon.com.

After iOS, Android and webOS - AdMob is going for the Windows Phone 7 users. The "owned by Google" company...