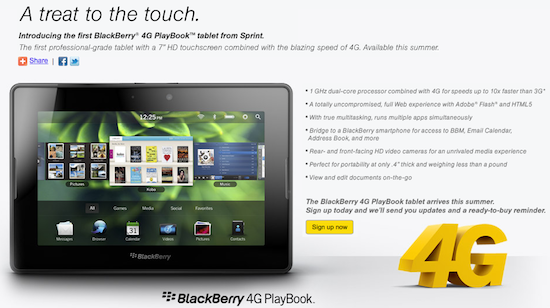 We’re expecting the Wi-Fi-only BlackBerry PlayBook to launch any day now, but a 4G version isn’t far behind. A few months ago Sprint had promised a WiMAX PlayBook, and now we’ve got a summer timeframe for a launch. Around the same time, I’m expecting we’ll see a software update to the Wi-Fi version which will enable better enterprise management and standalone PIM apps without using Bridge.

The BlackBerry PlayBook is RIM’s first tablet, and is coming out swinging. It’ll pack a dual-core 1 GHz TI OMAP 4430 processor, 1 GB of RAM, Wi-Fi, GPS, Bluetooth, and 3G with a little help from a BlackBerry smartphone. The QNX Neutrino-based operating system can handle multitasking and HD video like a champ, which looks great on the 7-inch 1024 x 600 display. There are also two cameras on there, one 5 megapixels on the back, and 3 megapixels on the front, which will likely be used for a dedicated video calling client RIM will release out of the gate. We’ve got some hands-on time with the thing over here, if you want to take a closer look.

Sprint’s landing page for the WiMAX BlackBerry PlayBook can be found over here if you want to sign up for e-mail availability notifications.

A juicy leak from Three UK has revealed a bunch of release dates, as well as our first look at...